This incredible private tour has been designed for travelers wanting to experience the highlights of the five countries that make up Central Asia—Uzbekistan, Kazakhstan, Kyrgyzstan, Tajikistan and Turkmenistan. It features the best of each country, including major cities, fascinating Silk Road towns and archaeological ruins, important UNESCO World Heritage sites, beautiful traditional crafts, spectacular mountain landscapes and much more.

Begin in Ashgabat, the capital of Turkmenistan. During private touring of Ashgabat’s unusual cityscape, see the vast collection of white marble buildings and golden monuments built over recent decades, and visit local mosques and museums according to your interests.

Continue to the town of Mary. During a private excursion, visit the important archeological complex of ancient Merv, a UNESCO World Heritage Site. See the ruins of a succession of oasis towns built in the area over a 4,000-year period, and learn how Merv became a major Silk Road trading post and one of the largest cities in the world before being destroyed by the Mongols in the early 1200s. If desired, we can arrange a visit to the extensive ruins of the Bronze Age town of Gonur Depe or to the Darvaza Gas Crater, a flaming pit in the desert that’s also known as the Gates of Hell.

Transfer across the border to Bukhara, an ancient Silk Road religious, cultural and trading center in Uzbekistan. During private touring, discover why this UNESCO World Heritage Site is considered the best-preserved medieval Central Asian town. Venture inside ancient domed bazaars to browse stalls for local handicrafts such as rugs, silk, suzani (embroidered textiles), jewelry and woodwork. See cultural highlights such as the Ark, an impressive ancient palace-fortress behind mighty walls; the Poi Kalyan complex, including the 12th-century Kalyan (Kalon) Minaret, a masterpiece of patterned brick, and the 16th-century Miri Arab Madrassa, with its enormous portal and two blue-domed towers; the Lyabi-Khauz ensemble, which features two madrassas and a Sufi lodge around a pond and shady plaza favored by locals; the four-towered Char Minar gatehouse; and the 10th-century Ismail Samani Mausoleum. One evening, enjoy a performance of traditional Uzbek dances. Additional touring options include visiting the Bolo Hauz Mosque, Maghoki-Attari Mosque or the synagogue and Jewish cemetery.

One morning, take an excursion to Gijduvan, a town famous for rustic pottery, to visit local workshops and browse for colorful glazed ceramics. Alternatively, enjoy a private cooking class to learn to prepare traditional Uzbek dishes such as plov (lamb pilaf) and samsa (meat pastry).

Continue by high-speed train to fabled Samarkand, one of Central Asia's oldest and most important Silk Road cities and a UNESCO World Heritage Site. During private touring, visit the magnificent Registan, a former trading square bounded on three sides by towering madrassas covered in dazzling tile mosaics. Gaze at the blue-tiled portals, minarets and domes while learning about Samarkand's role as the capital of the influential Timurid dynasty in the 14th and 15th centuries. See other Timurid landmarks such as the Bibi-Khanym Mosque, the ornate Gur-e-Amir mausoleum dedicated to legendary ruler Timur (Tamerlane) and his relatives, and the 15th-century Ulugh Beg Observatory, a monumental astronomical device. Walk among the beautiful tile-covered mausoleums of the Shah-i-Zinda ensemble, a hillside necropolis active for more than 800 years. Visit local markets and handicrafts boutiques, and stroll through the old Jewish quarter. Also tour the Afrosiab Museum, which houses archaeological artifacts and an important seventh-century fresco. One evening, enjoy a performance about Uzbek history and traditional costumes at the El Merosi theater. Upon request, Artisans of Leisure can also arrange a tasting at a local winery, a lesson to learn to make traditional bread and other activities.

One day, enjoy a private excursion over the mountains to the town of Shakhrisabz, the birthplace of Timur (Tamerlane) and a UNESCO World Heritage Site. In the historic center, see structures built during the Timurid dynasty, such as the colossal ruined gates of the Ak Saray Palace, the Dorus Saodat memorial complex, the Kok Gumbaz Mosque and the Chorsu Bazaar.

Next, enjoy a scenic transfer to Dushanbe, Tajikistan, with touring en route of Sarazm, a ruined ancient town and UNESCO World Heritage Site; Panjakent, a lively border town with an archaeological site; orIskanderkul Lake and the Fann Mountains, a region renowned for beautiful natural scenery.

During private touring around Dushanbe, visit the National Museum of Antiquities and the restored Hisor Fortress, which once protected local trade routes. Alternatively, take a private excursion to ShirkentNational Park to look for fossilized dinosaur tracks while hiking among green hills and rock formations.

Fly to Tashkent, Uzbekistan for a night before continuing to Bishkek, the capital of Kyrgyzstan. During private touring, explore the city center and see highlights such as the White House, the Kyrgyz National Museum of Fine Arts and the Osh Bazaar, a lively produce and housewares market, to browse for traditional Kyrgyz crafts such as felt hats, embroidered slippers and handmade carpets.

One day, take a private excursion to Ala Archa National Park, a deep river valley in the rocky Tian Shan Mountains, for short hikes among the forests and slopes of the breathtaking region. Alternatively, visit the Burana Tower, an 11th-century minaret and UNESCO World Heritage Site, and see a field of mysterious, centuries-old balbals (carved stone heads and figures).

Next, cross the border to Kazakhstan and continue to Almaty, a cosmopolitan city (and former capital) in the shadow of the rugged Tian Shan Mountains. During private city touring, see highlights such as leafy Panfilov Park and the colorful wooden Ascension Cathedral, a Russian Orthodox church also known as Zenkov Cathedral that dates from 1907. Also visit the Green Market, a large indoor food hall. Learn about the history and culture of Kazakhstan in the Central State Museum, which has objects from the Bronze Age to today. See landmarks such as Republic Square and the Independence Monument with its sculpture of the Golden Man on top. Depending on your interests, perhaps also visit the Museum of Folk Music Instruments or see Soviet-era buildings, the subway, Arasan Baths and other places that make up the urban fabric of Almaty. Upon request, we can arrange tickets to performances at the Kazakh State (Abay) Opera and Ballet Theater.

One day, enjoy a private excursion to Big Almaty Lake, a turquoise lake in Ile-Alatau National Park, for beautiful views of the water and the Tian Shan Mountains. Also visit a local falcon farm and bird-of-prey sanctuary to learn how hawks, falcons and other hunting birds are still used by traditional nomadic hunters.

Another day, enjoy a full-day private excursion in the region. Options include touring Charyn Canyon and the famed Valley of the Castles, a dramatic landscape of eroded, rust-colored cliffs and towers formed by wind and water; visiting Tamgaly (Tanbaly), a UNESCO World Heritage Site of rocky hills with more than 5,000 petroglyphs created from the Bronze Age through the early 20th century; seeing Tamgaly-Tas, where monumental Buddhist images and texts were inscribed hundreds of years ago on large rock outcroppings along the Ili River; and hiking in other parts of Ile-Alatau National Park, such as Turgen Gorge, a diverse landscape of waterfalls, river valleys, foothills and forests.

Continue to Shymkent, a base for cultural and scenic touring in the region. If desired, take a private excursion to nearby Sayram, a traditional town that has been continuously occupied for more than 3,000 years and has numerous historical Muslim structures. One day, enjoy a private excursion to Turkestan, an ancient Silk Road caravan town, to see the Mausoleum of Khoja Ahmed Yasawi, a Timurid-era building covered in vibrant tile mosaics that’s now a pilgrimage destination and UNESCO World Heritage Site. Also see other monuments that make up the historical complex, such as the Friday Mosque, Underground Mosque and Mausoleum of Rabigha-Sultan Begum. En route, visit the vast archaeological site of Otrar, the ruins of a Silk Road trading town and fortress destroyed by the Mongols in the 13th century. Another day, take a private excursion to Aksu Canyon, part of the oldest nature reserve in Kazakhstan. Look for native wildlife during privately guided hiking among the forests and grasslands.

Conclude the tour in Nur-Sultan (formerly known as Astana), the capital of Kazakhstan on the Ishim River. During private touring in this city on the steppe, see futuristic architecture and important landmarks that reflect the cultural traditions and ambitions of the country. Tour the National Museum of Kazakhstan, a modern institution displaying important historical artifacts such as the ancient Golden Man treasures from the Issyk burial mound. See the iconic Bayterek Tower, which symbolizes a classic local legend, and the enormous Hazrat Sultan Mosque, built in 2012. Other highlights in Nur-Sultan include visiting two landmark buildings designed by British architecture firm Foster + Partners: the Palace of Peace and Reconciliation pyramid and the Khan Shatyr, a tentlike shopping mall and entertainment complex with a translucent plastic roof. Also see the Presidential Park, the Ak Orda Presidential Palace and the historic center of the city.

One day, opt to continue city touring, or enjoy a private excursion to Burabay National Park, where pine forests and dramatic rock outcroppings create a beautiful backdrop to Lake Borovoe and other lakes in the protected area. If desired, also visit the ALZHIR Museum-Memorial Complex, a gulag for thousands of Soviet women whose husbands were perceived as traitors under Stalin. 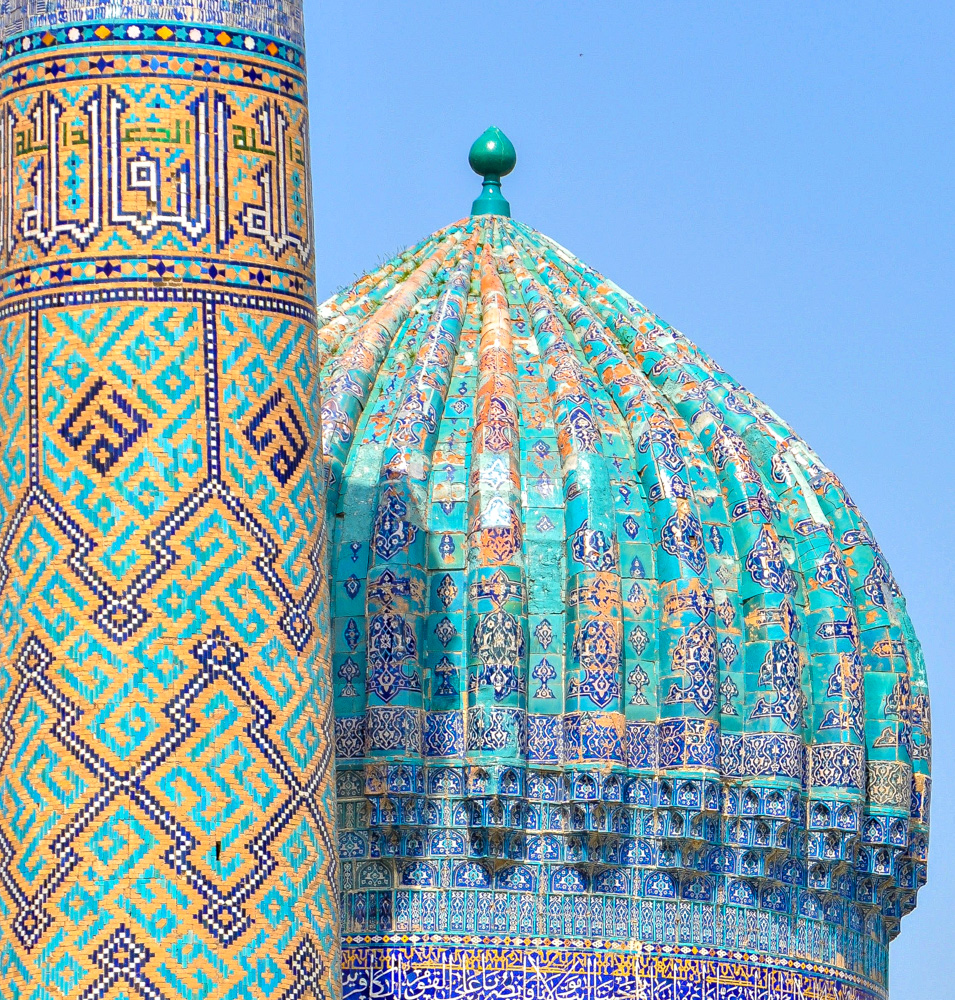 You all did a great job with my Uzbekistan, Kyrgyzstan & Georgia tour. The guides and local representatives were all terrific.
~ J.P., Delray Beach, FL

We have had nothing but great success using Artisans of Leisure. Every trip, experience, hotel and people are better than perfect. Bravo to your team.
~ M.W., Vancouver, Canada 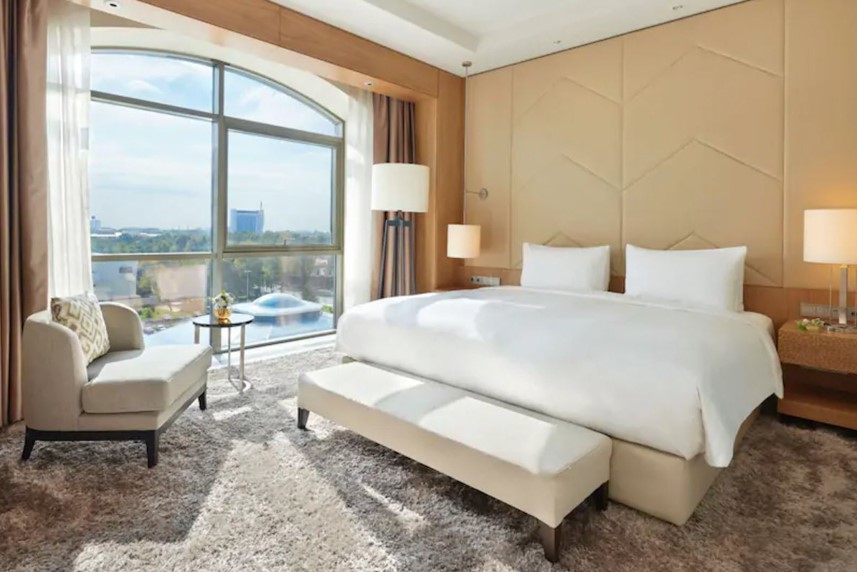 Uzbekistan & Central Asia On Our Blog 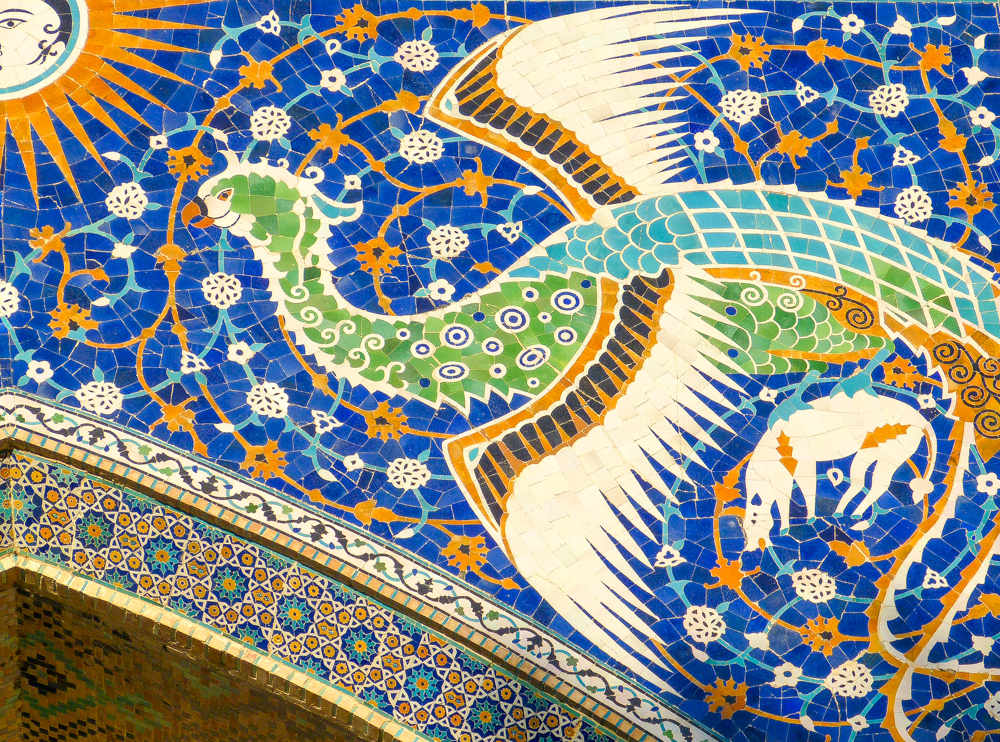 Postcard from Our Travelers: Samarkand, Uzbekistan