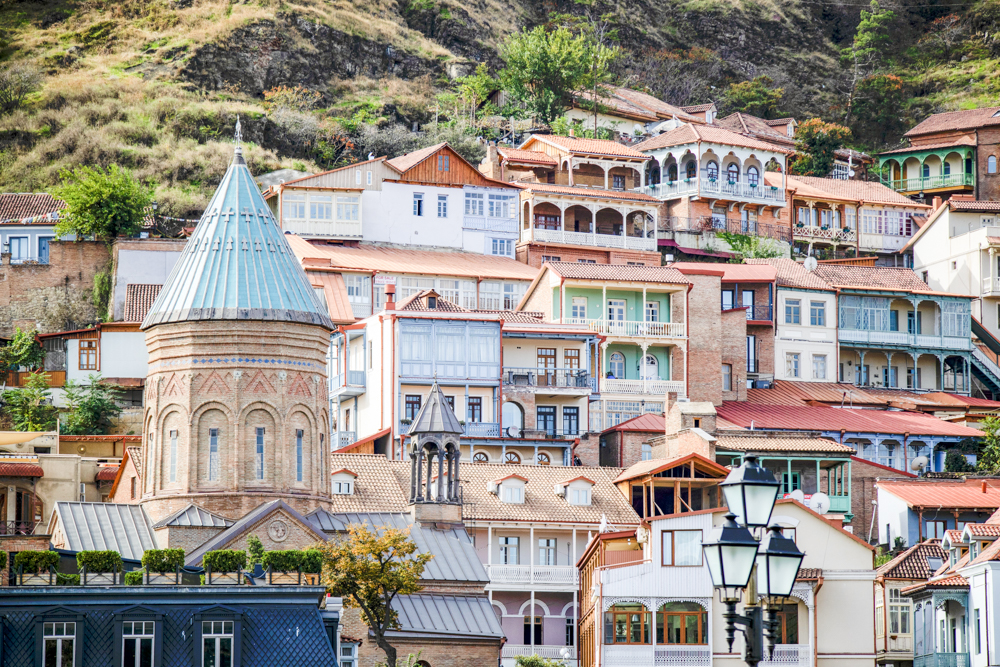 Tbilisi, the riverside capital of Georgia, offers visitors a captivating mix of rich history, eclectic architecture, and superb food and wine. It’s the perfect introduction to Georgia and a highlight of our private Georgia tours. 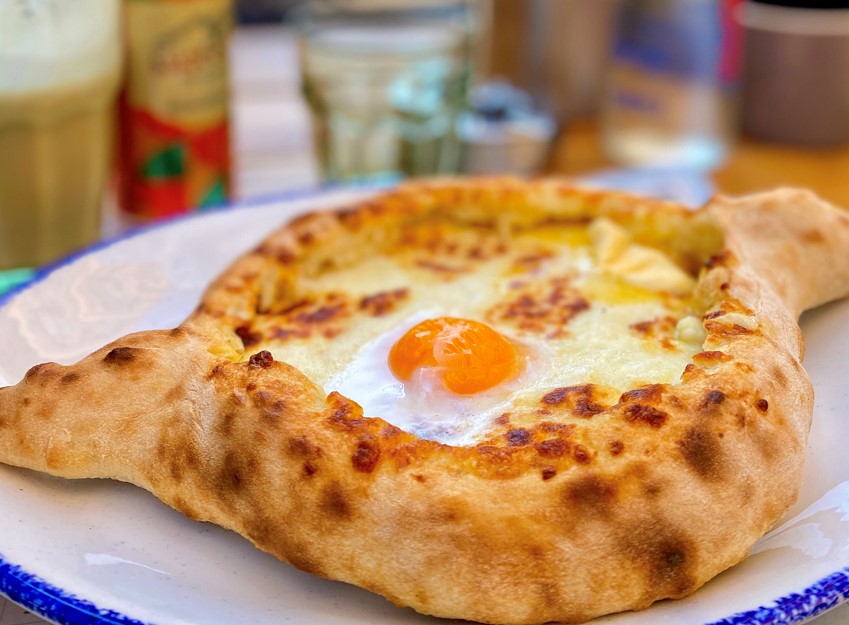 The most interesting and important part of Tbilisi is the Old Town, where the city was founded along the Kura (Mtkvari) River in the fifth century. Colorful historic houses with traditional wooden balconies crowd the winding streets, creating a picturesque backdrop for a private walking tour. 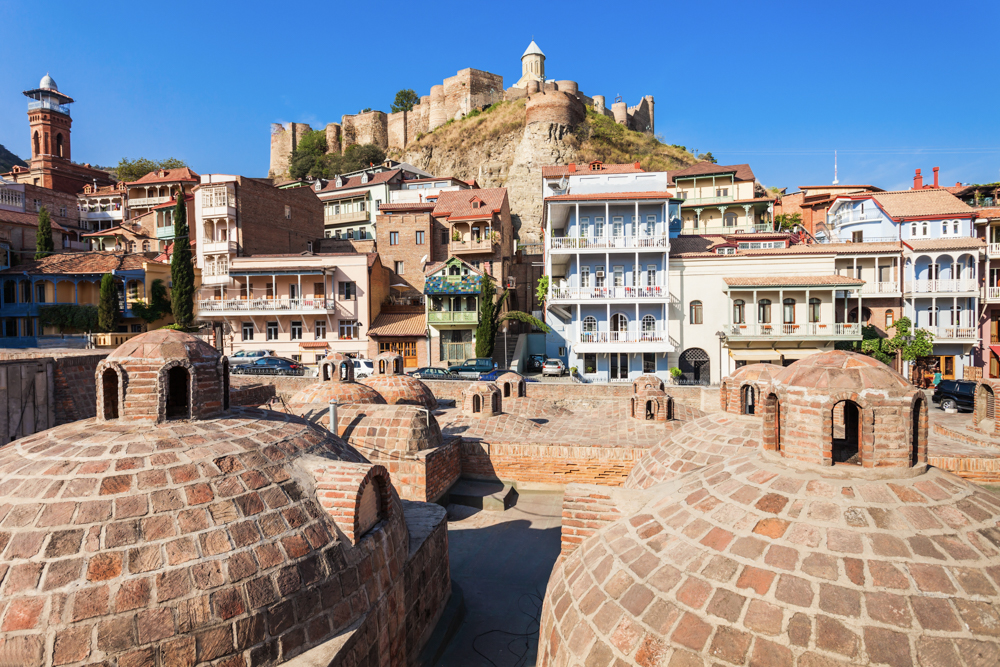 Brick domes on the roofs of bathhouses in the Abanotubani (“bath district”) neighborhood of the Old Town give the area a distinctive look. According to legend, King Vakhtang I established Tbilisi after finding hot springs here. (In Old Georgian, Tbilisi means “warm.”) Today, those same sulfurous hot springs draw locals and visitors wanting to relax in the soothing water.

One of several public baths in Abanotubani is the iconic Chreli Abano (Orbeliani) bathhouse, which has a colorful mosaic facade inspired by Islamic architecture. 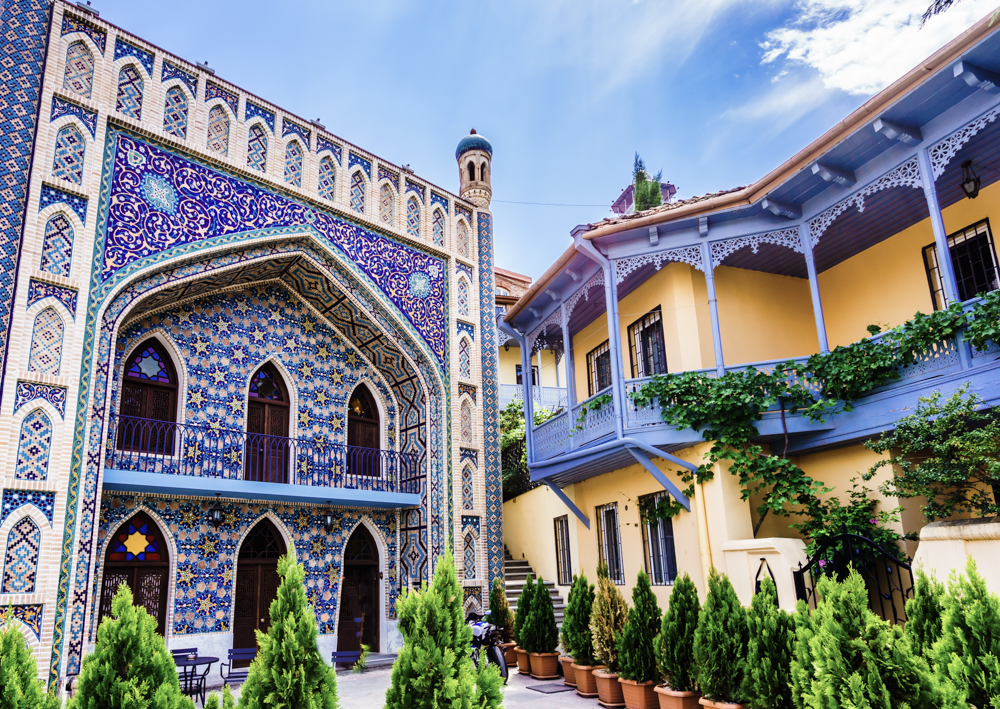 The crenellated walls of Narikala Fortress rise on a ridge above the Old Town. The fortress predates the founding of Tbilisi and reflects the turbulent history of the region. Over the centuries the area has been controlled by the Sassanids, Byzantines, Arabs, Seljuk Turks, Mongols, Russians and Soviets. Georgia is now an independent republic, but these varied influences have helped shape Tbilisi’s diverse culture, cuisine and architecture. 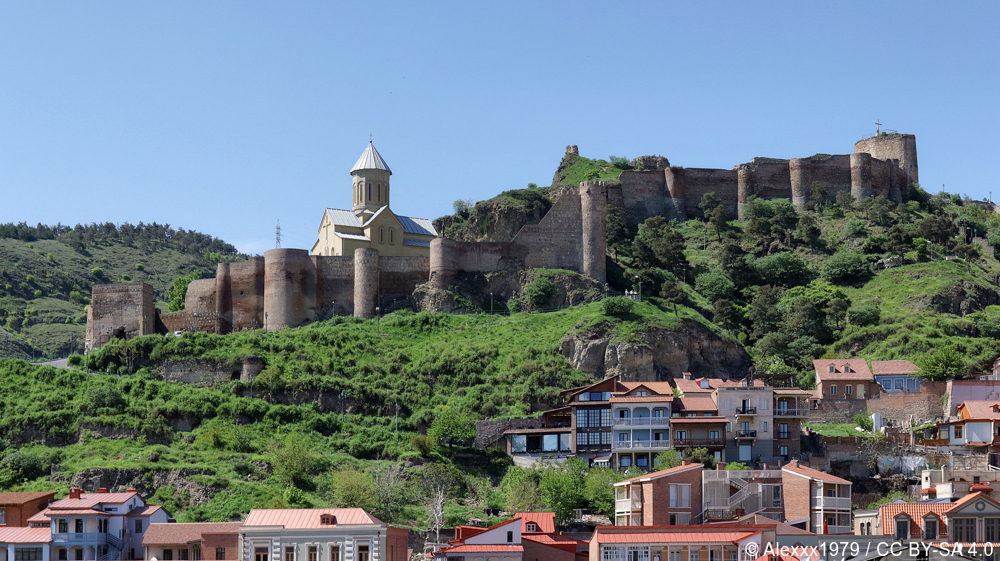 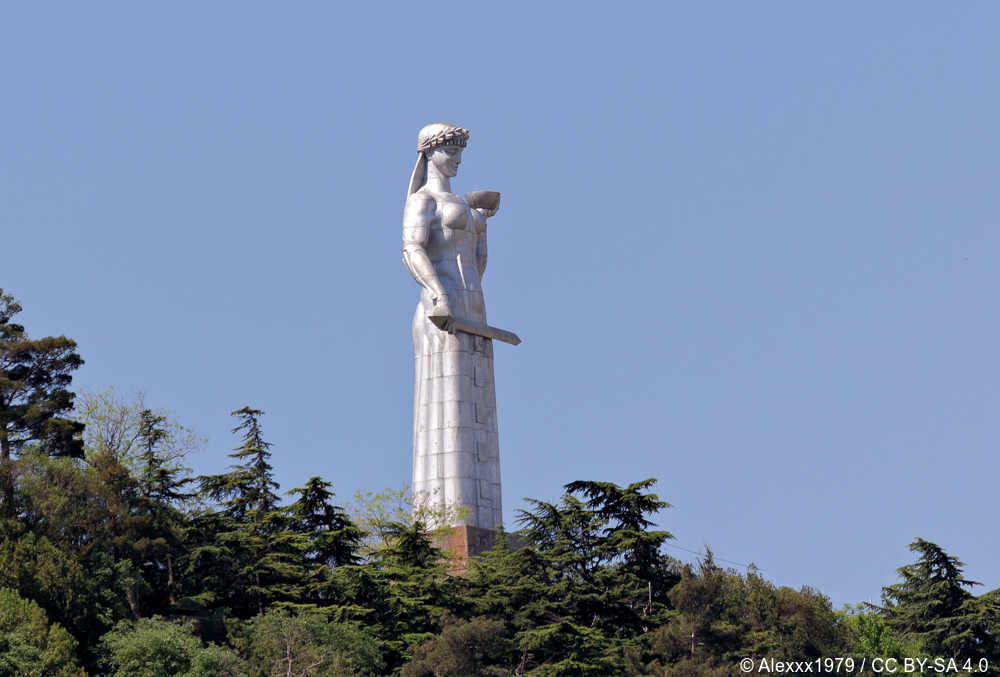 For visitors wanting a bird’s-eye view of Tbilisi, we can include a gondola ride across the Kura River to Narikala Fortress and the Mother Georgia sculpture. Another option for great city views is the funicular that scales the slopes of Mount Mtatsminda and offers panoramas over Tbilisi. 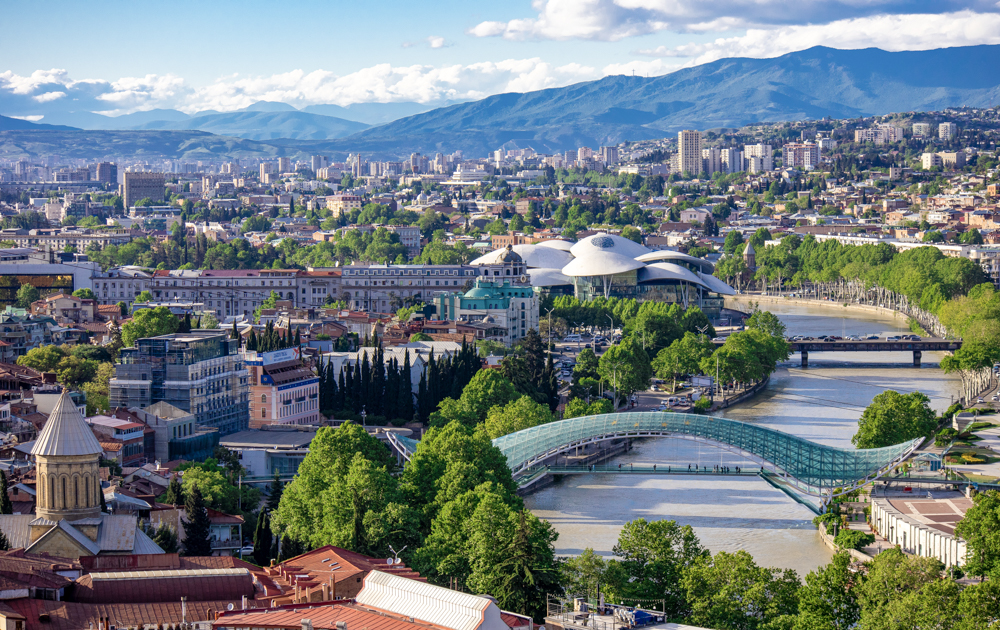 Other important landmarks around the Old Town are related to the city’s religious communities.

Christianity became the official religion of the Georgian kingdom in the fourth century. Interesting Christian sites in Tbilisi include the medieval Metekhi Church, which perches on a cliff above the Kura River, the revered Sioni Cathedral and the sixth-century Anchiskhati Church, the oldest church in Tbilisi. 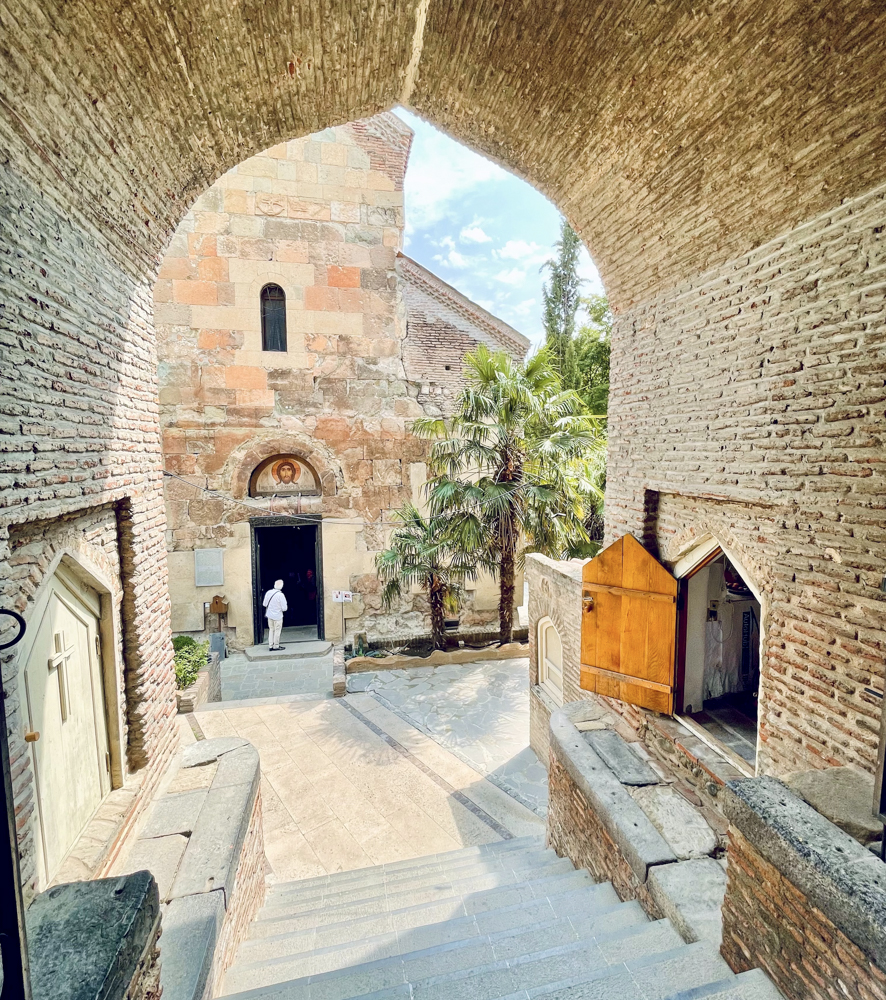 Near Abanotubani is the Tbilisi Central Mosque (also known as the Juma Mosque), which is unusual in serving both Shiite and Sunni worshippers.

The Great Synagogue in the Old Town was completed 1903 and remains an active part of Tbilisi’s Jewish community. 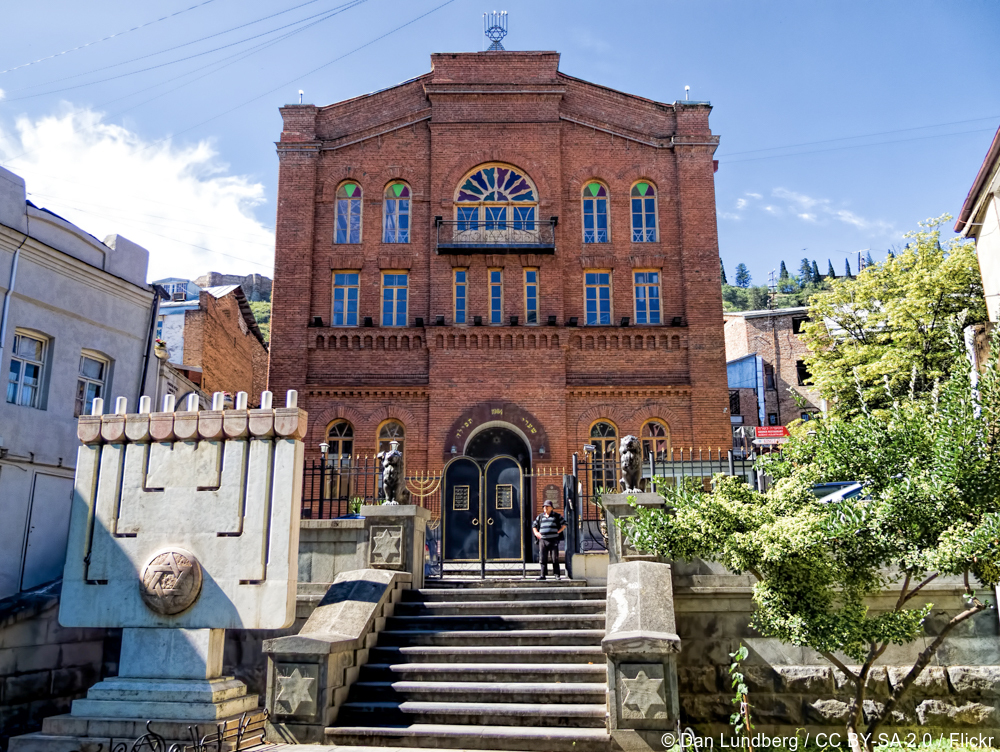 Outside the Old Town, one of our favorite places is tree-lined Rustaveli Avenue, the most famous street in Tbilisi. Grand 19th- and early 20th-century edifices fronting the boulevard contain major political and cultural institutions that make up modern Georgian life, including the Parliament of Georgia, the Georgian National Museum, the Georgian National Academy of Science and the Tbilisi Opera and Ballet State Theater. 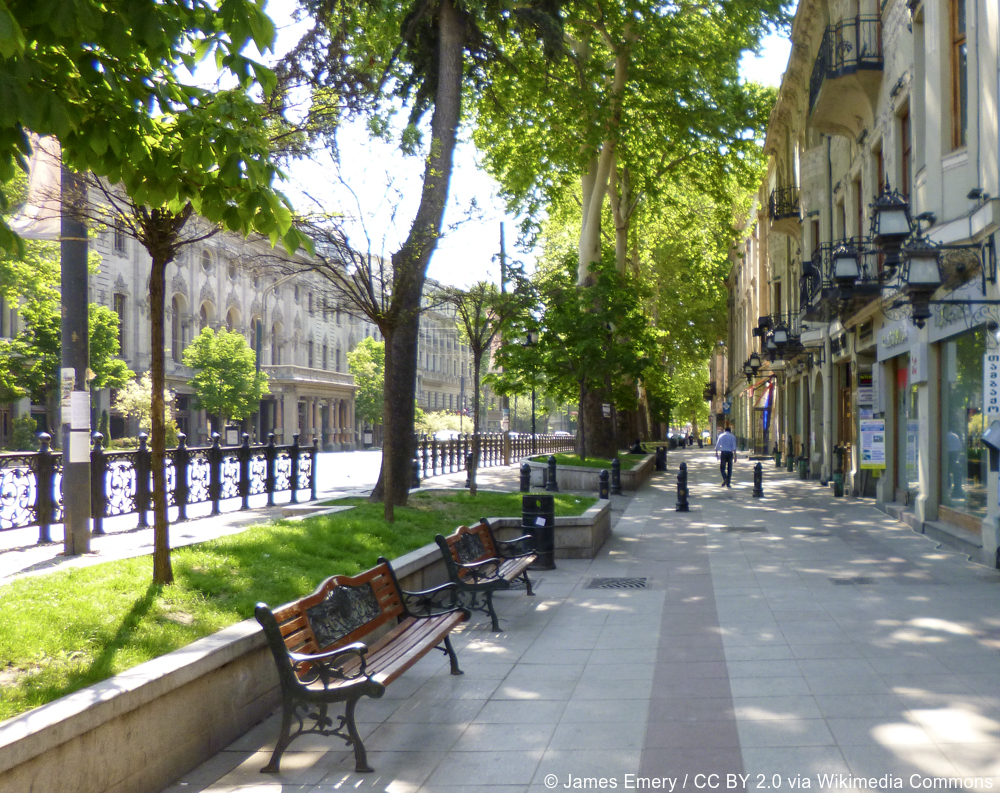 At one end of Rustaveli Avenue is Freedom Square, a large plaza that has been the site of important events in Tbilisi’s history. A gold statue of St. George slaying the dragon stands atop a column in the center of the plaza. 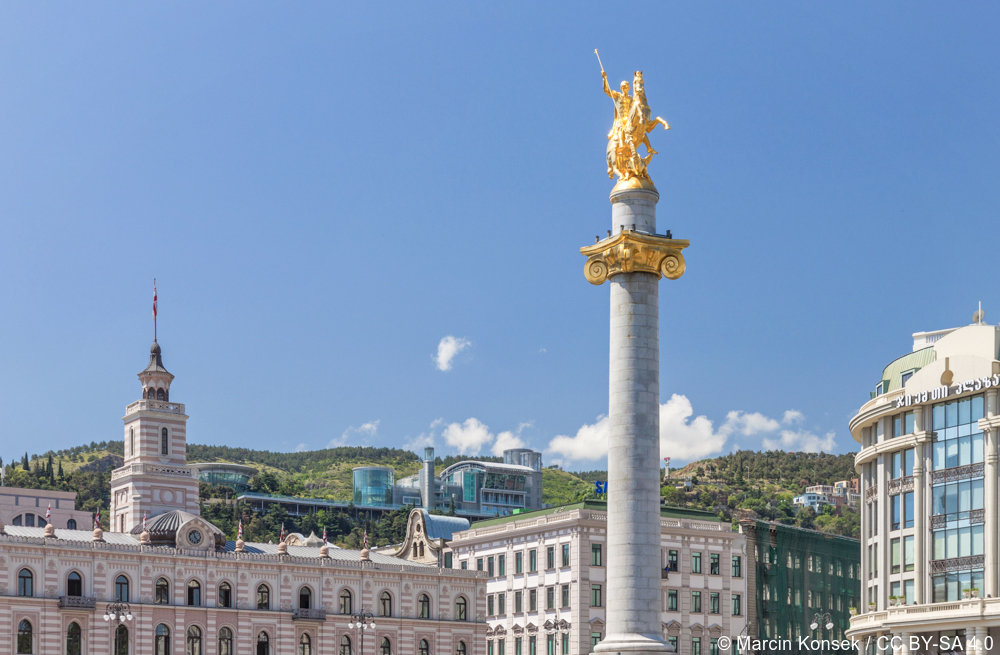 Newer projects around the city include the Bridge of Peace, a contemporary steel-and-glass structure completed in 2010 that spans the Kura River and connects the Old Town with Rike Park, a public green space… 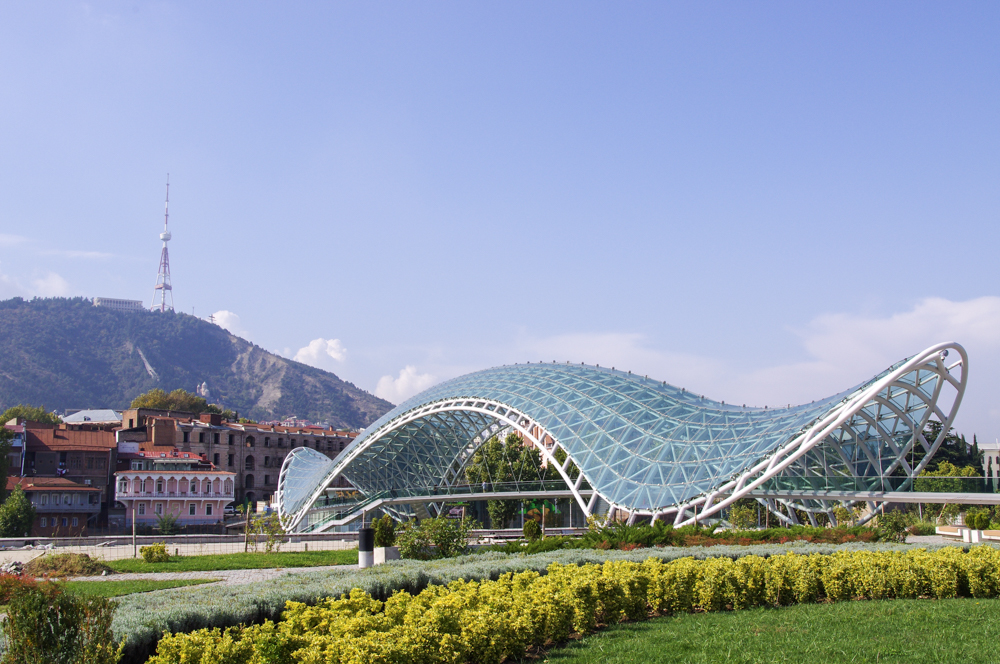 …and the enormous Holy Trinity Cathedral, which was built in a traditional style and consecrated in 2004. 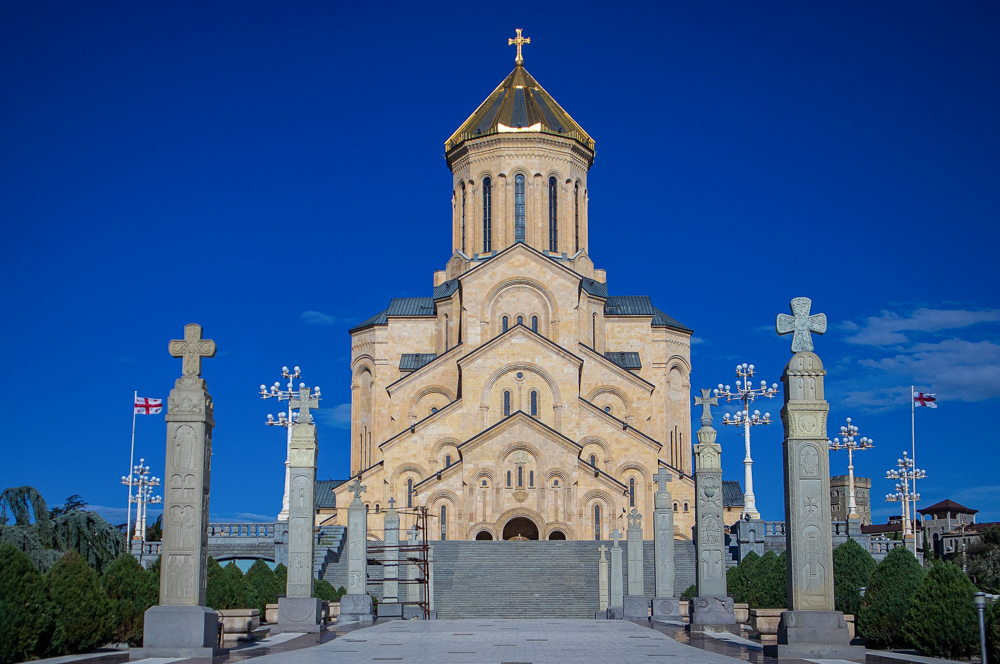 Food and wine are a highlight of a visit to Tbilisi, and dining out is a wonderful way to experience legendary Georgian hospitality. Georgian cuisine is renowned for flavorful combinations that incorporate Middle Eastern, European and Asian influences. 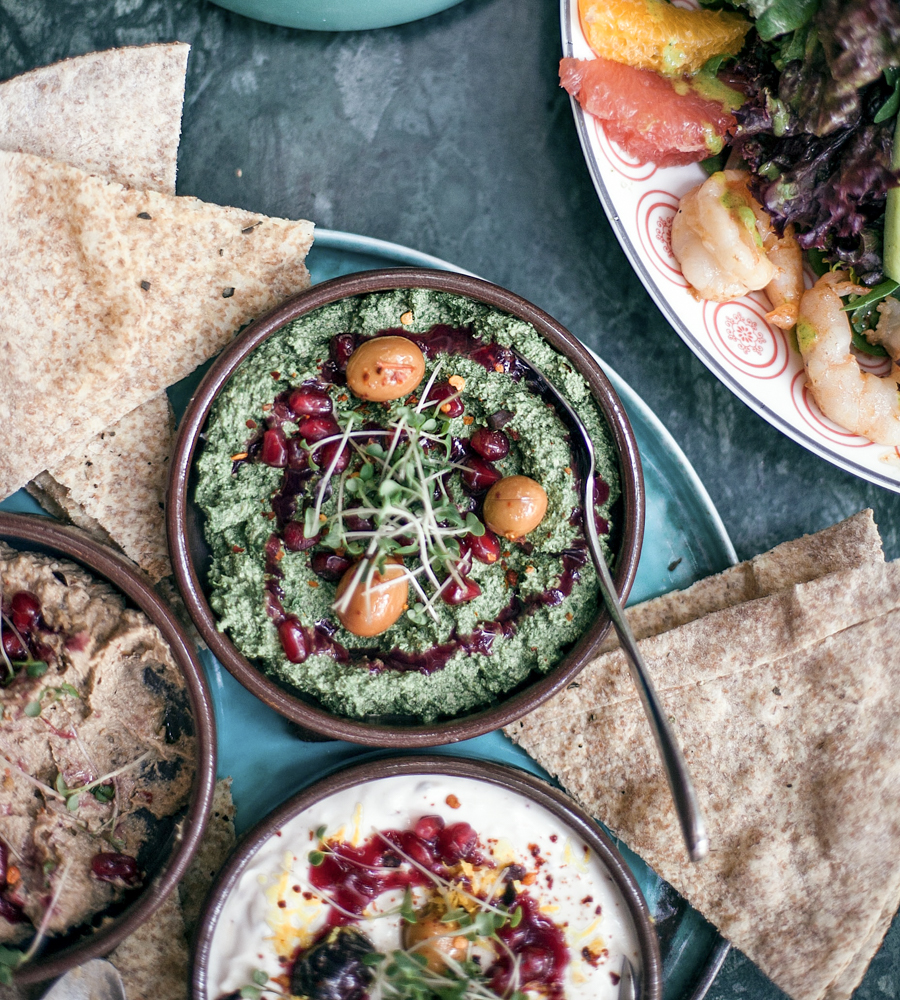 Artisans of Leisure arranges reservations at the best Tbilisi restaurants for trying classic Georgian dishes such as khinkali (dumplings) and khachapuri (boat-shaped bread stuffed with cheese and topped with an egg). We can also arrange cooking lessons to learn how to prepare some of the most popular Georgian dishes. 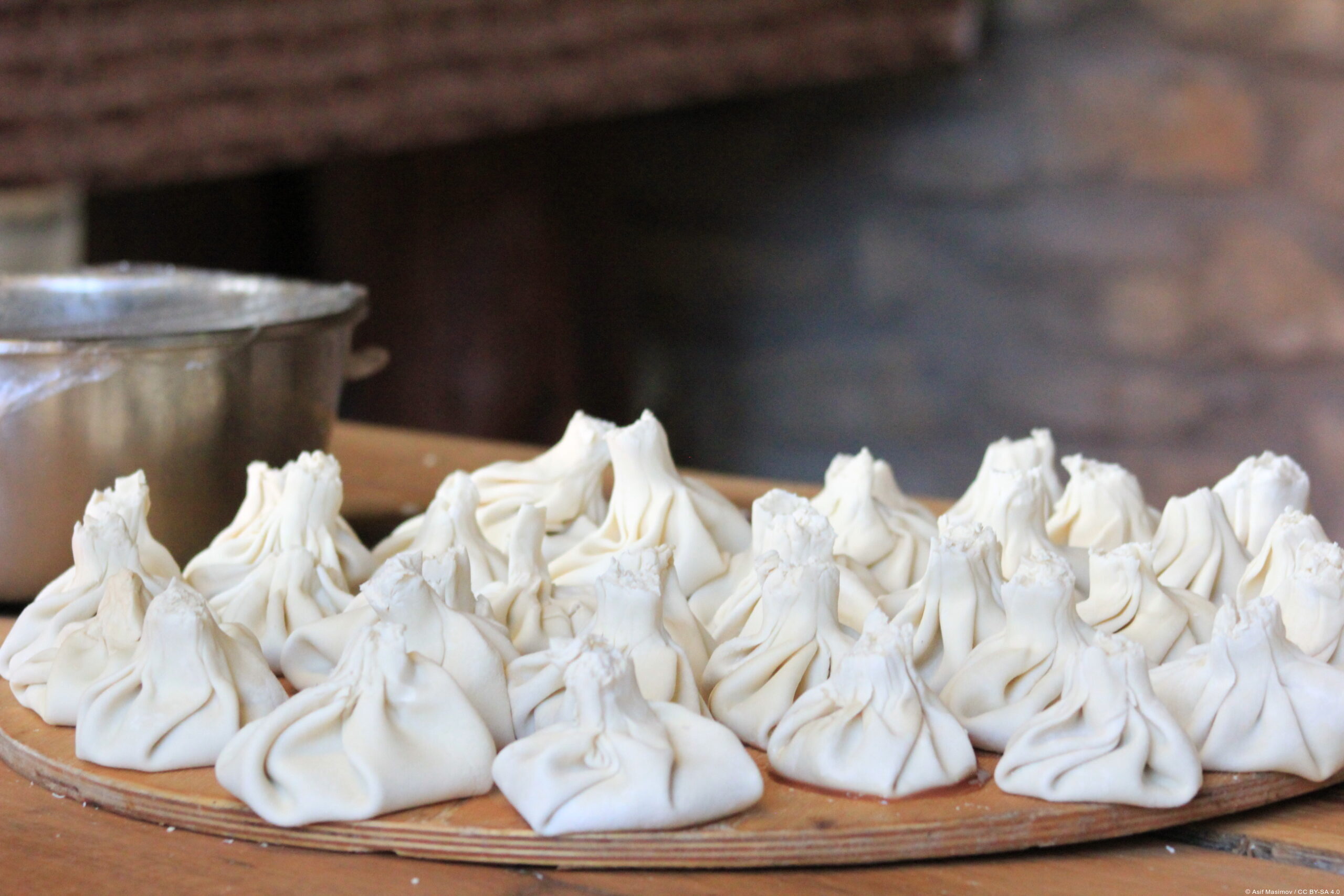 Georgians have been making wine for more than 8,000 years. In Tbilisi, we can arrange wine tastings of Georgian wines made from indigenous grapes such as Saperavi and Rkatsiteli. We can also arrange private day excursions to the Kakheti wine region—the most important in Georgia—to visit wineries and wine villages. 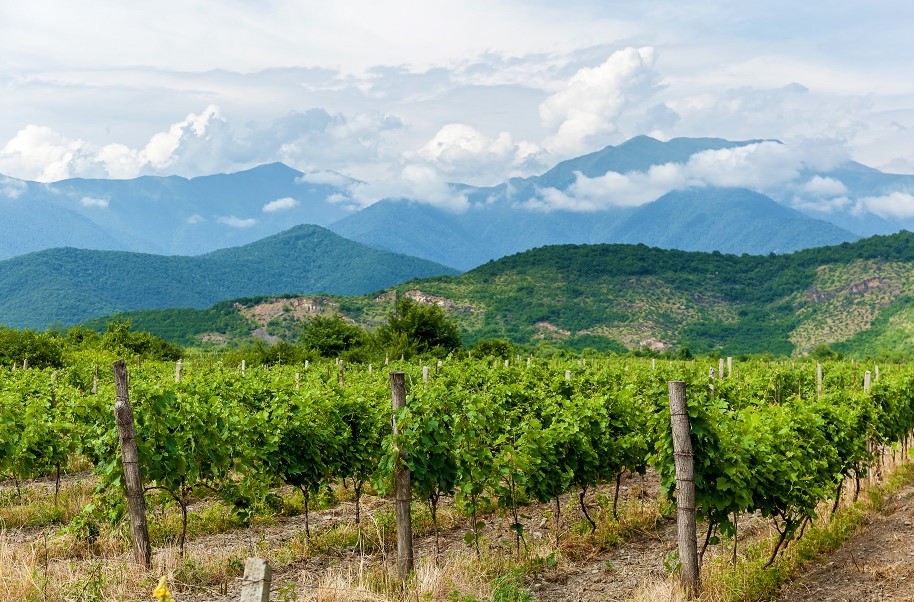 Tbilisi has some of Georgia’s best places to shop for traditional Georgian crafts, including handmade kilims and carpets. 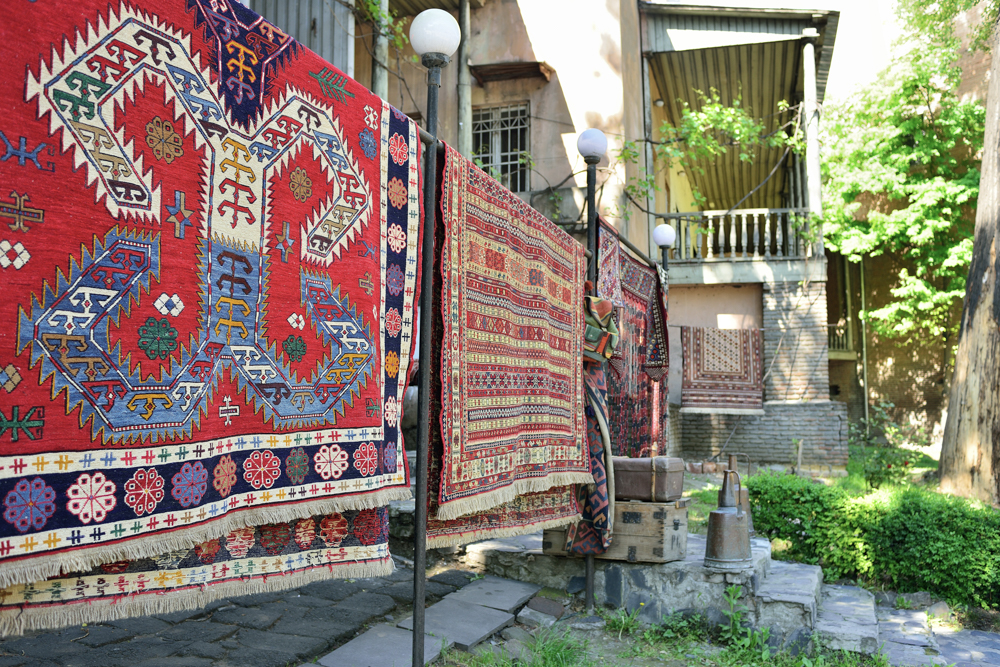 We take our travelers to Tbilisi’s leading boutiques, galleries and flea markets during our private Tbilisi tours, according to their interests. 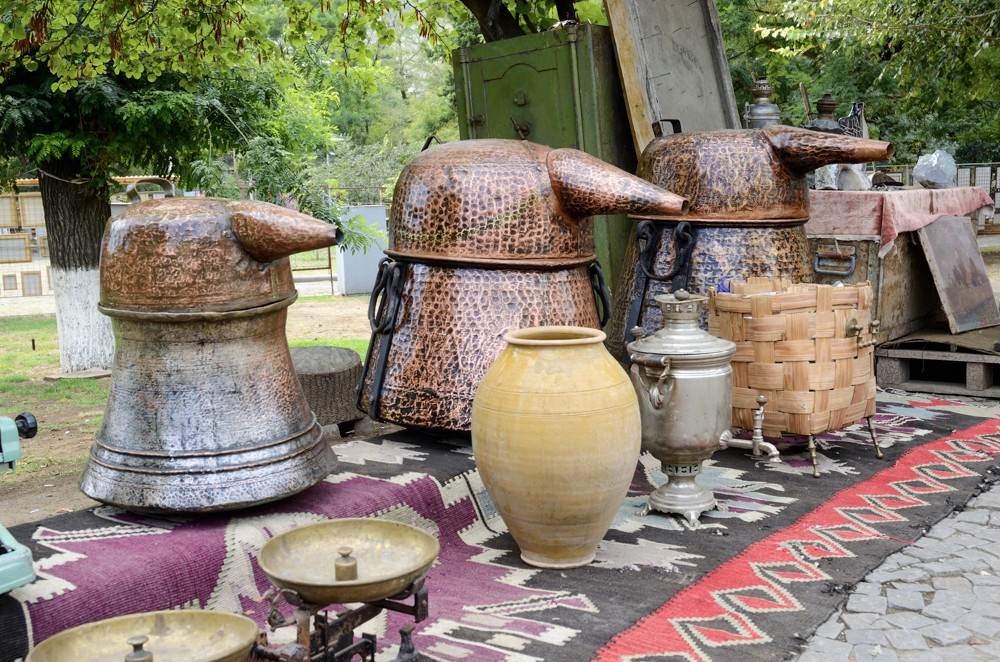 Tbilisi is also an excellent base for private day excursions around Georgia. In addition to the Kakheti wine region, other favorite day trips are to the cave city of Uplistsikhe and to Mtskheta, an ancient capital of Georgia and pilgrimage destination with UNESCO-listed churches and monasteries. 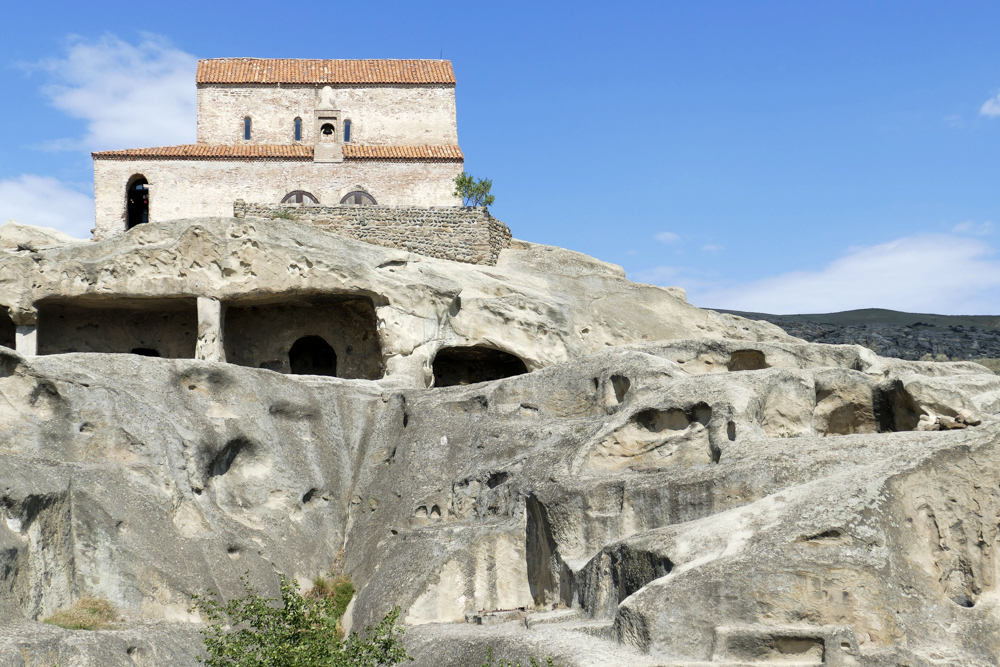