A Private “Sound of Music” Tour in Salzburg, Austria 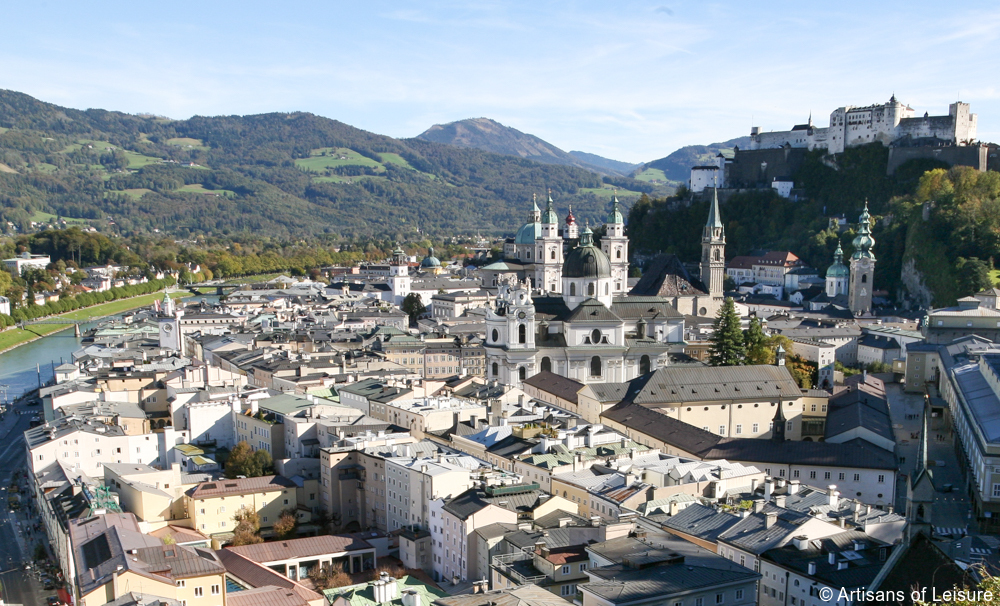 Many of our travelers to Salzburg, Austria, enjoy taking a private tour of locations made famous in The Sound of Music, the classic 1965 movie starring Julie Andrews and Christopher Plummer.

Set in Salzburg in the years leading up to World War II, the movie follows Maria, a lively young woman who begins as a nun-in-training and ends up as the wife of naval officer Georg von Trapp and the stepmother to his seven children. The film was adapted from the Rodgers and Hammerstein musical (which was based on the memoir of the real Maria von Trapp) and features memorable songs such as “Do-Re-Mi,” “Edelweiss” and “My Favorite Things.”

Even travelers who aren’t fans of the Academy Award-winning film will enjoy this tour, which includes some of the most beautiful parts of the Baroque city (a UNESCO World Heritage Site) and the nearby mountain landscapes that served as backdrops for the movie. 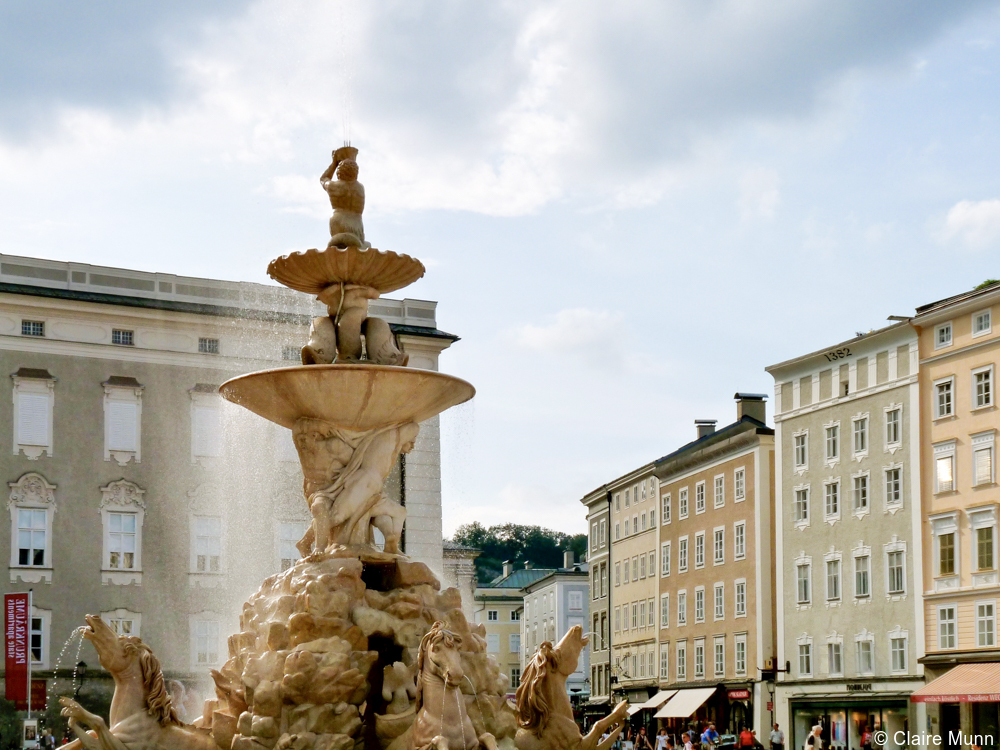 Some of our favorite places associated with the iconic film include:

1. The Mirabell Palace and Gardens

The beautiful 17th-century Mirabell Palace and Gardens in central Salzburg provided key settings for Maria and the von Trapp children during the “Do-Re-Mi” montage, including the Pegasus Fountain and the stairs. 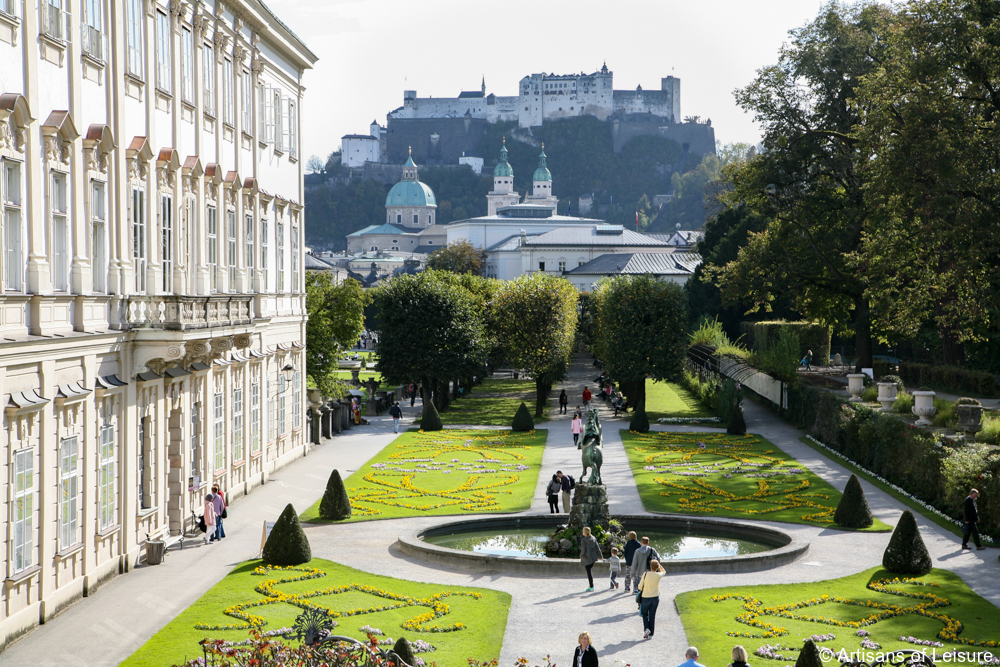 The gardens also have wonderful views to the domes of the Salzburg Cathedral and the hilltop Hohenzollern Castle in the background. 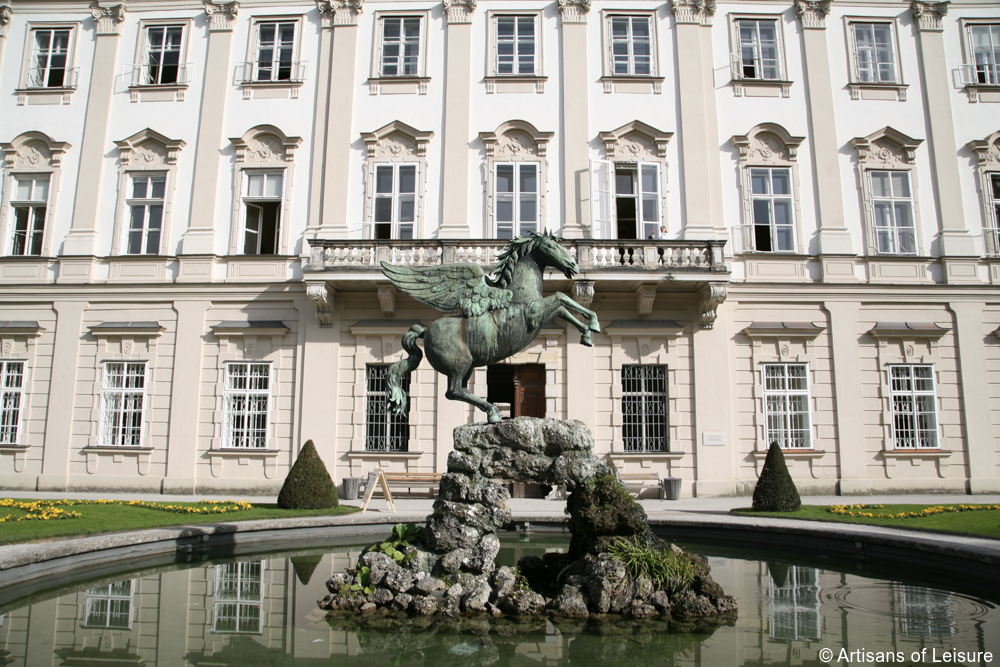 Scenes that took place on the terrace, gardens and lakefront of the von Trapp villa were shot at this palace (also known as Schloss Leopoldskron) on the outskirts of Salzburg. 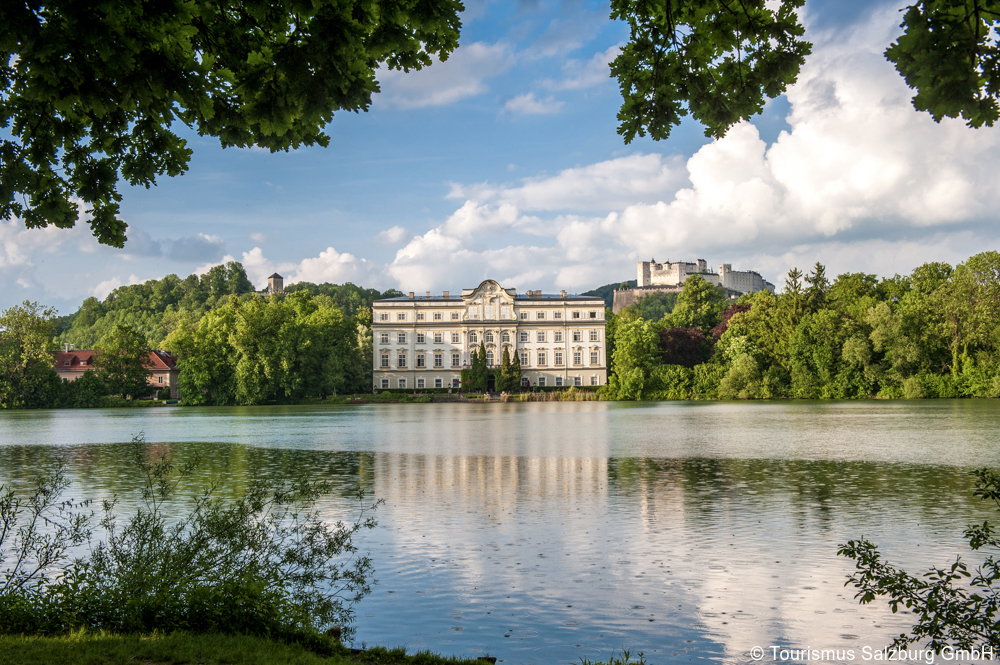 If desired, Artisans of Leisure can arrange lunch at a favorite local restaurant with some of the best views of the lake and palace.

More serious Sound of Music fans might consider having us to book a room for them at the Hotel Schloss Leopoldskron, which gives access to the beautiful interiors and gardens of the palace. 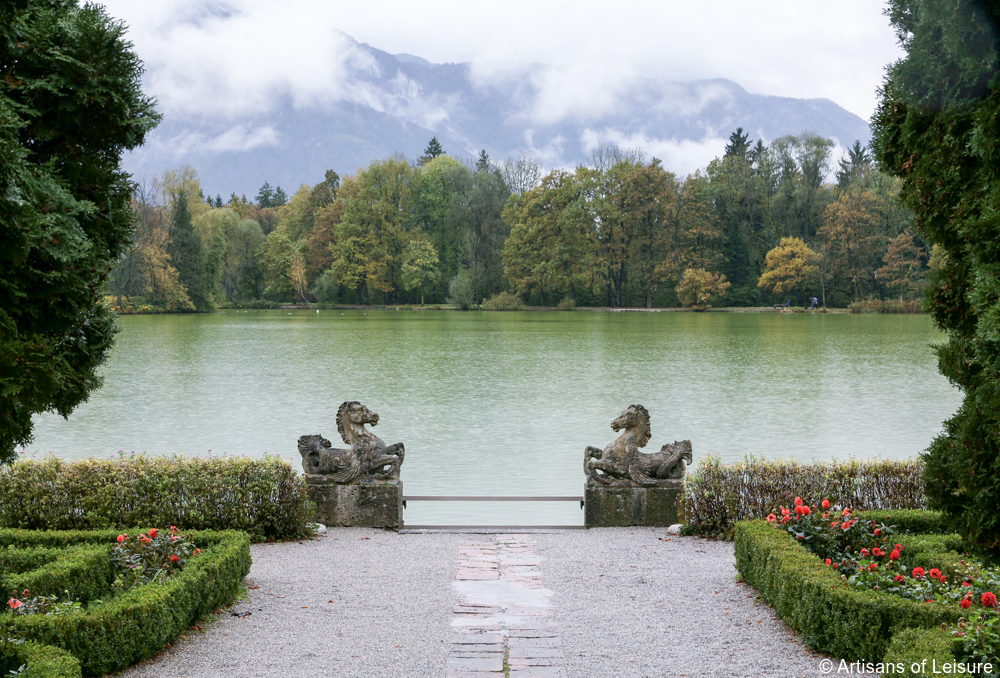 Although the palace itself was not used for filming, its Venetian Room inspired the look of the famous ballroom in the movie. 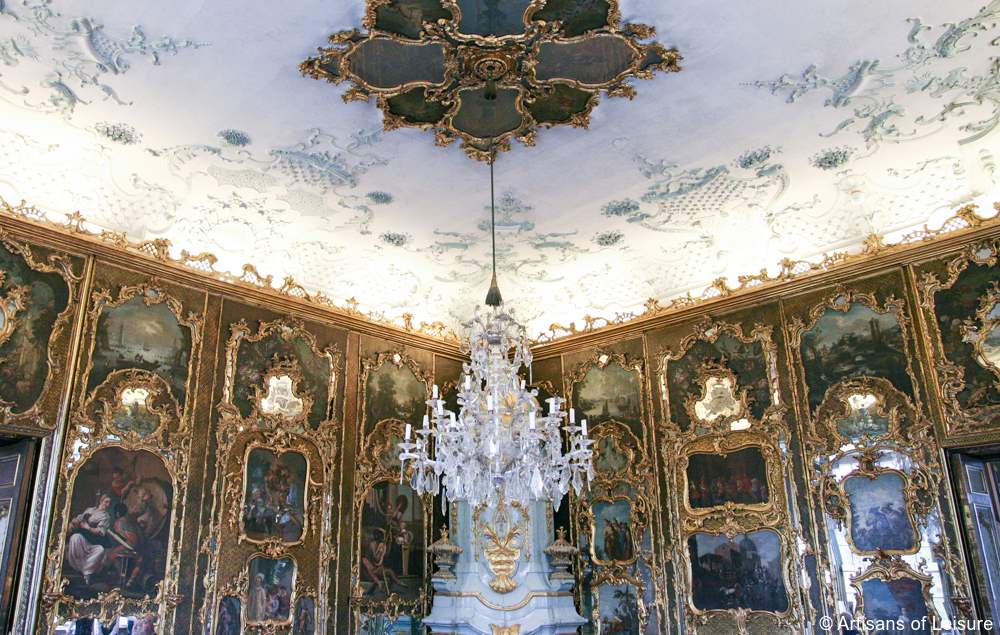 A reconstruction of the gazebo where Liesl von Trapp and Rolf the postman danced and sang “Sixteen Going on Seventeen” is on the grounds of Hellbrunn Palace (Schloss Hellbrunn), a 17th-century estate outside Salzburg. 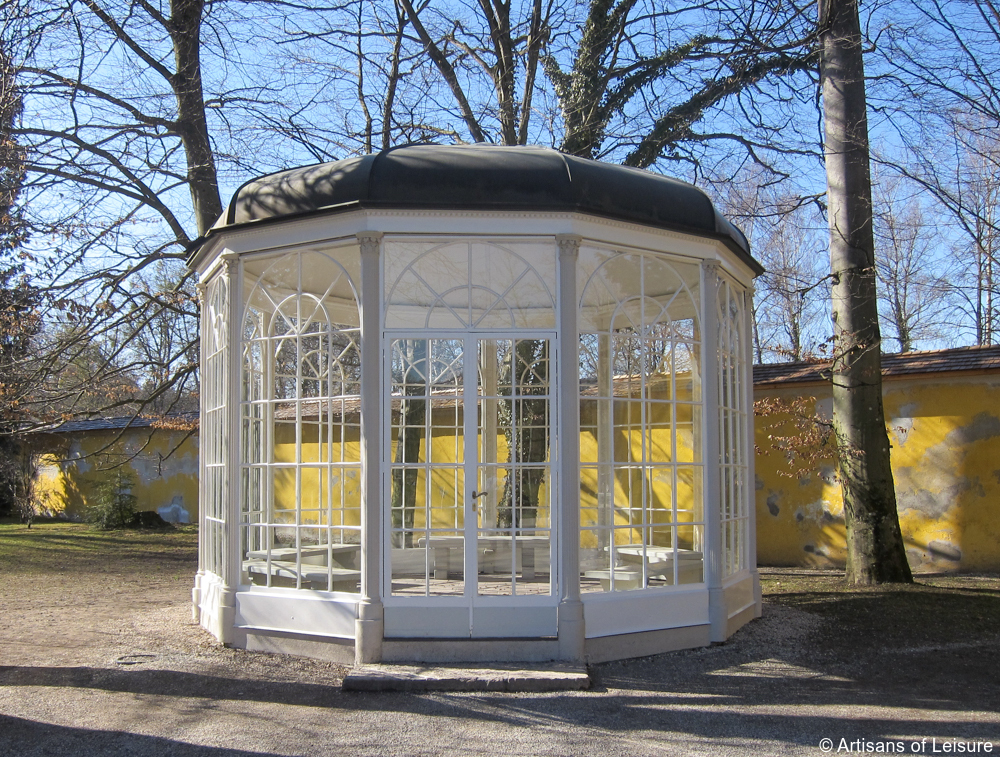 Upon request, Artisans of Leisure can also arrange an exclusive after-hours tour of the palace and its gardens, where whimsical interiors and trick fountains have been entertaining visitors for centuries. 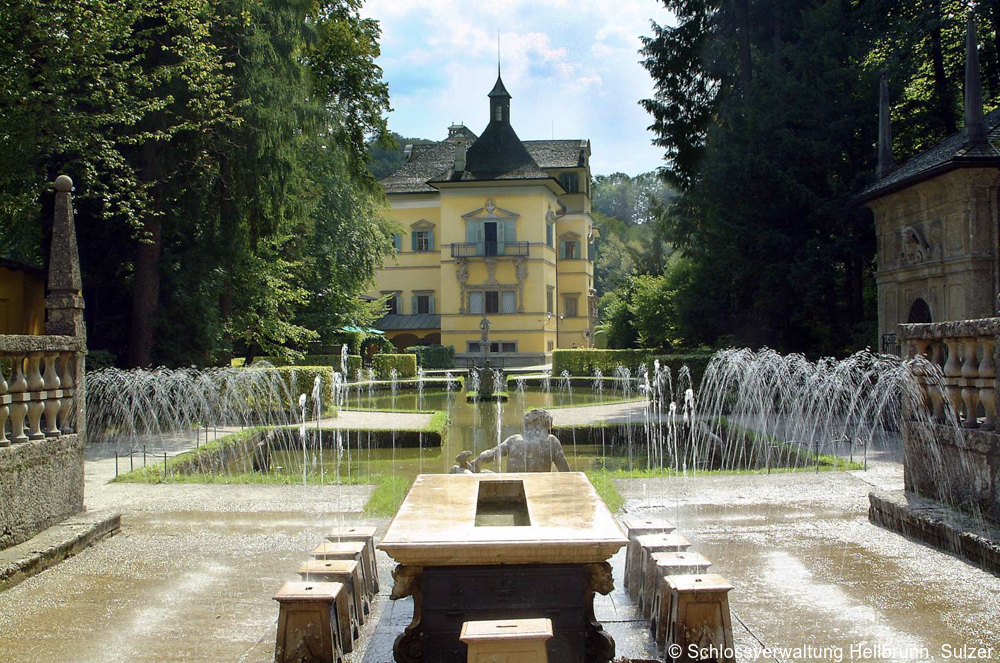 Close to Hellbrunn Palace, the 17th-century Frohnburg Palace (Schloss Frohnburg) featured in The Sound of Music as the exterior of the Von Trapp family villa. In the film, we see the yellow facade when Maria first arrives as a governess, singing “I Have Confidence.” 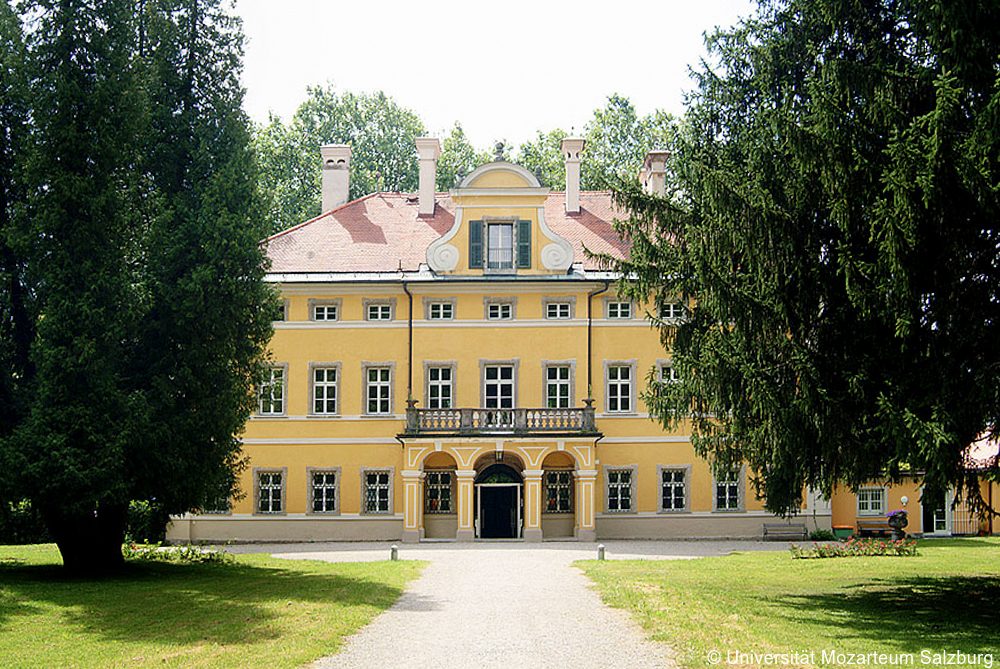 As in the film, the real-life Maria was a postulant at the historic Nonnberg Abbey before leaving to work for Georg von Trapp as a governess. The ancient Benedictine complex is a notable landmark in the hills of Salzburg. 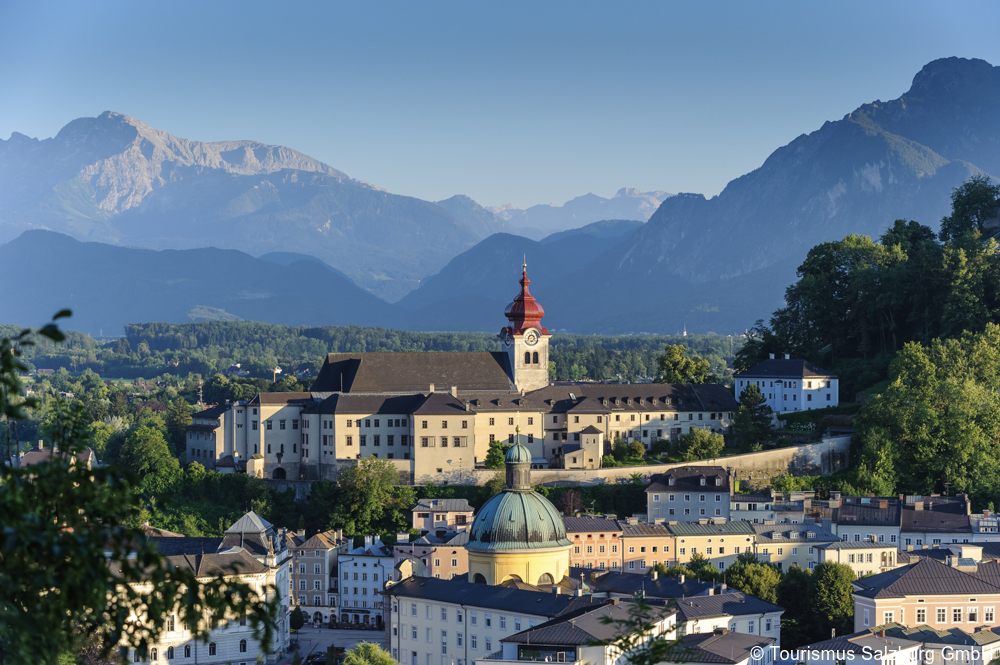 It’s also still an active convent (where the nun’s choir sings every morning), so some interiors are closed to the public. We can take interested travelers to see the church and its medieval murals. (The scene with the nuns singing “How Do You Solve a Problem Like Maria?” and others set at the abbey were filmed on sets inspired by the convent.) 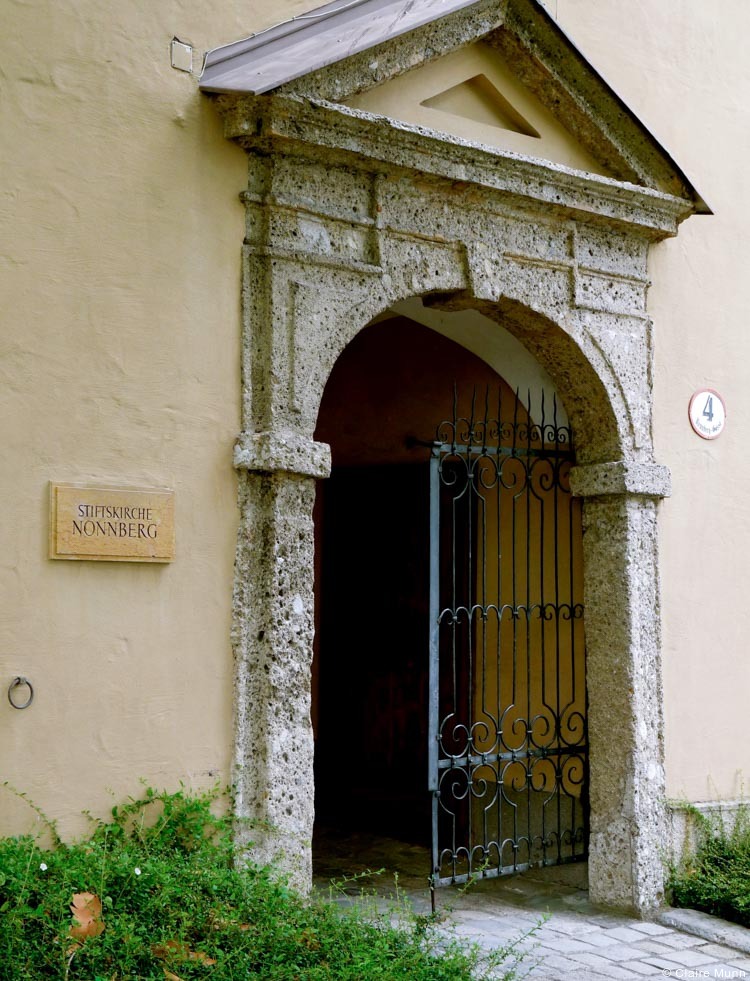 If the hills are alive anywhere, it’s this region of dramatic mountains and crystal-clear lakes. In The Sound of Music, the Salzkammergut landscapes feature in the opening titles, the “Do-Re-Mi” montage, and the final scene of the Von Trapps escaping to Switzerland.

We take our travelers on a drive through the stunning scenery of the region, stopping in traditional villages or at an upscale hotel for a meal with a view. 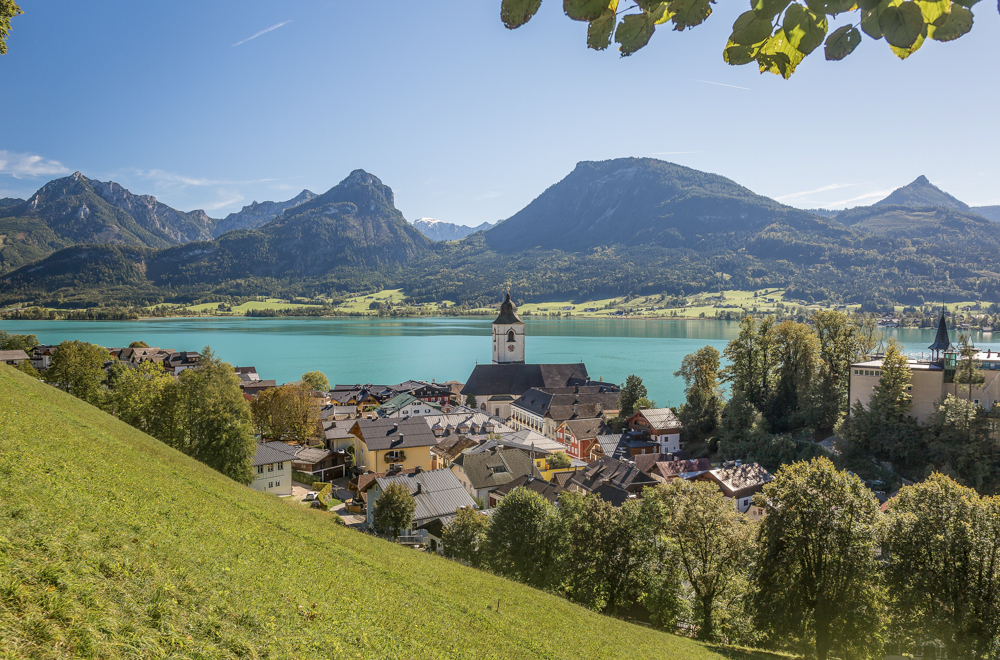 One of the Sound of Music highlights of the Salzkammergut is visiting the lakeside town of Mondsee to go inside the ornate Basilica of St. Michael… 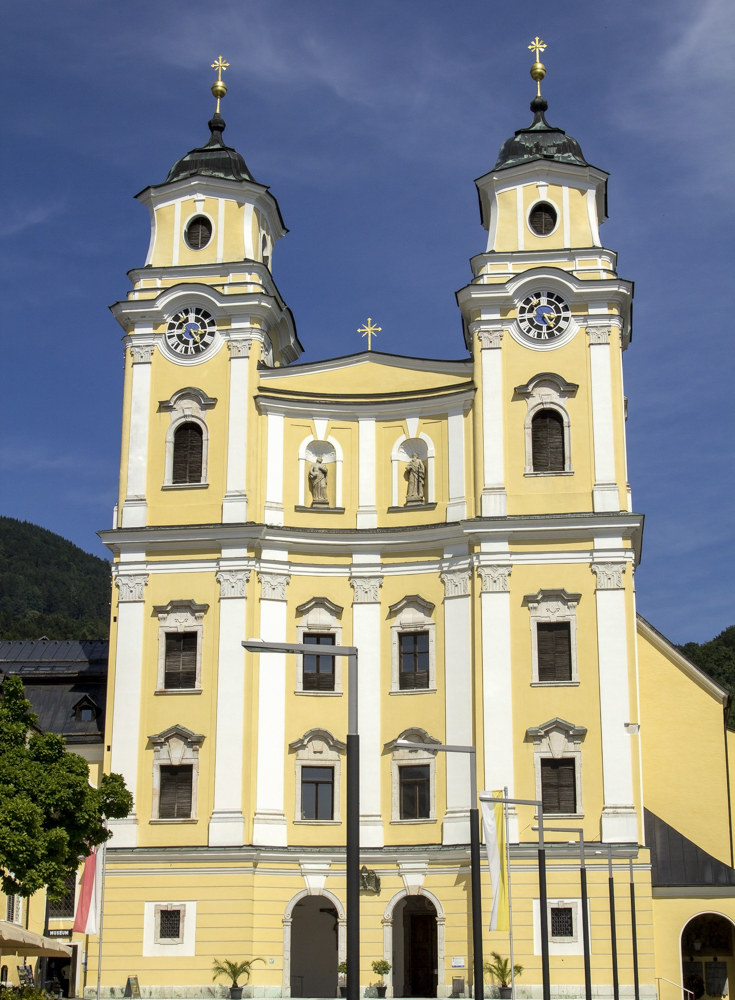 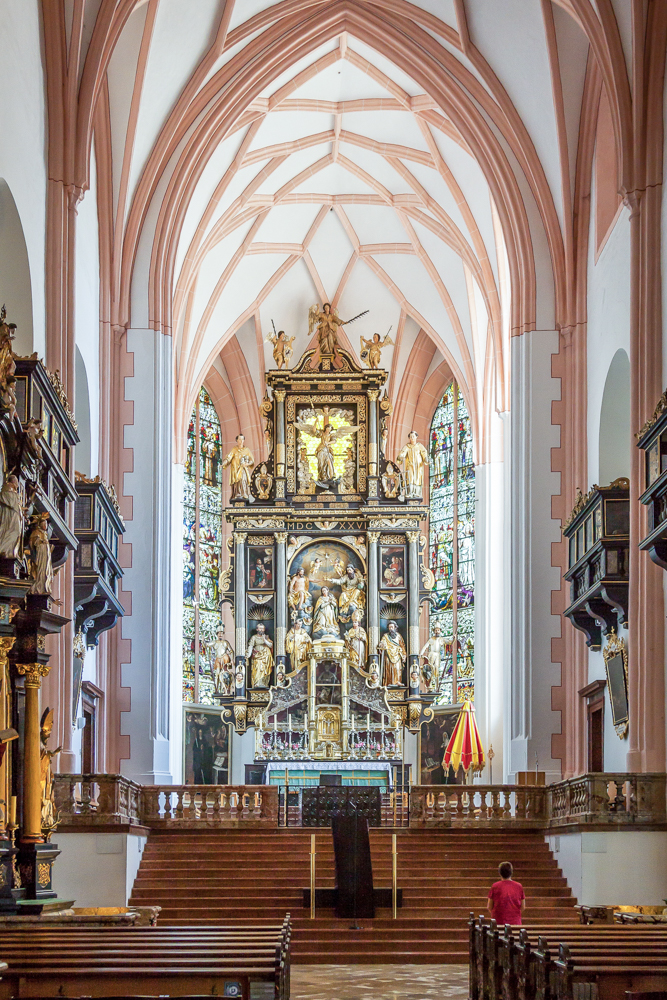 17th-century arcades hewn into the walls of a former rock quarry in central Salzburg are the backdrop to the renowned Salzburg Festival each summer.

In The Sound of Music, the venue hosts a competition with the von Trapp family singing “Edelweiss” and “So Long, Farewell” just before they attempt to escape to Switzerland. (The real Trapp Family—the group formed by Maria and her stepchildren—performed here in 1935.) 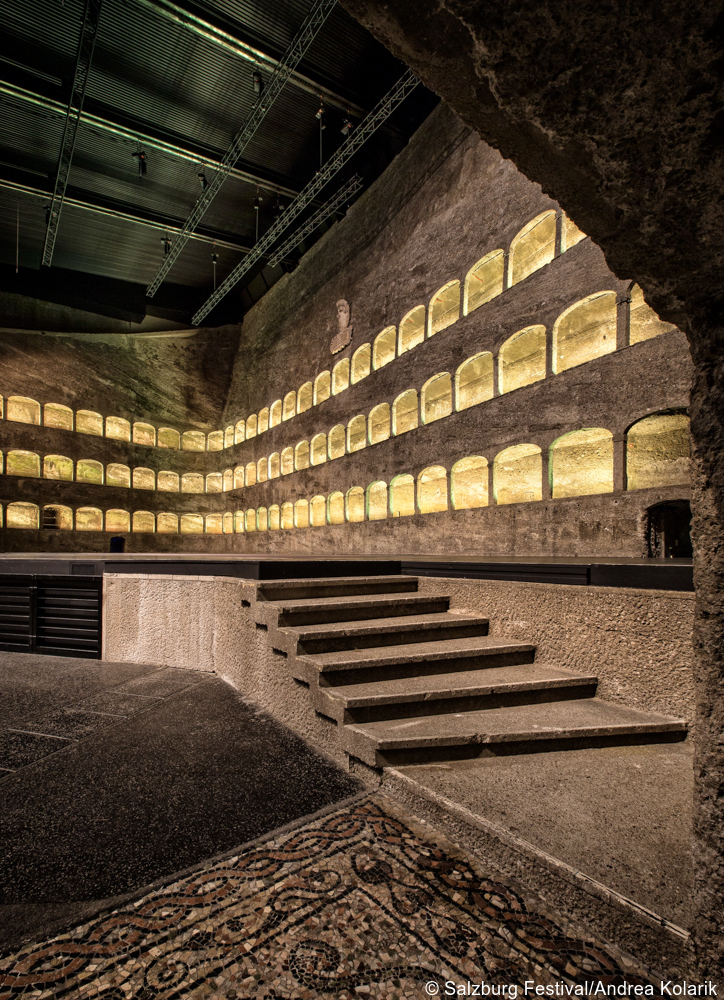 Upon request, Artisans of Leisure can arrange a tour of the Summer Riding School or tickets to a performance during the Salzburg Festival.

Next to the Summer Riding School is St. Peter’s Monastery. Its historic cemetery and catacombs served as the inspiration for the sets used to film the von Trapp family hiding from Nazi soldiers before their daring escape at the end of the movie. 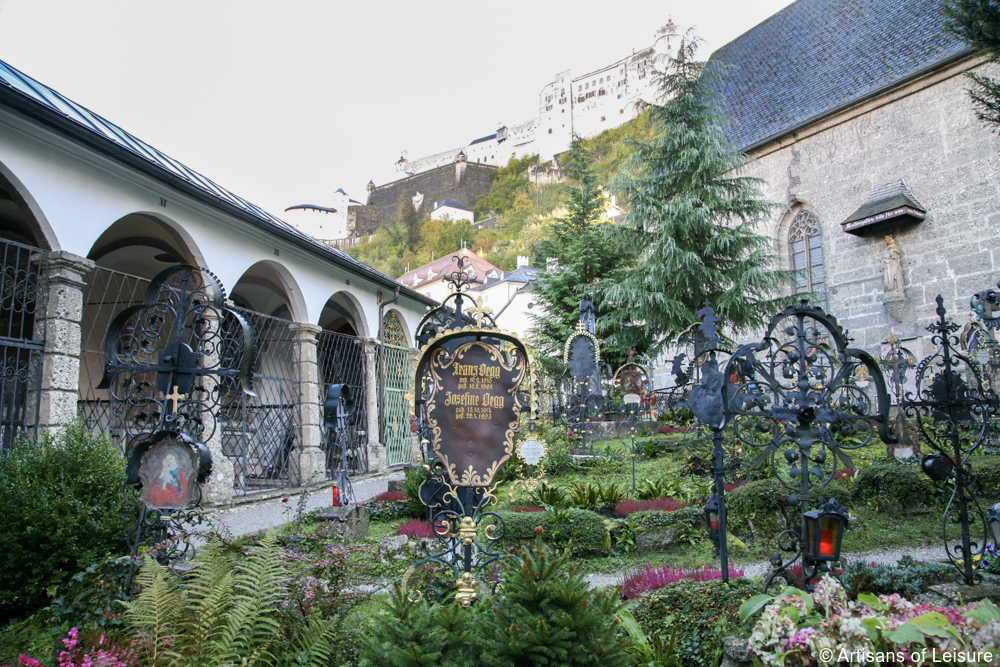 Time in Salzburg combines well with Vienna as well as destinations in Hungary and Germany. (The iconic “The Hills Are Alive” opening sequence was actually filmed in the mountains of Germany, near the Austrian border.)

Contact Artisans of Leisure to begin planning a private Austria tour featuring Salzburg and The Sound of Music locations. 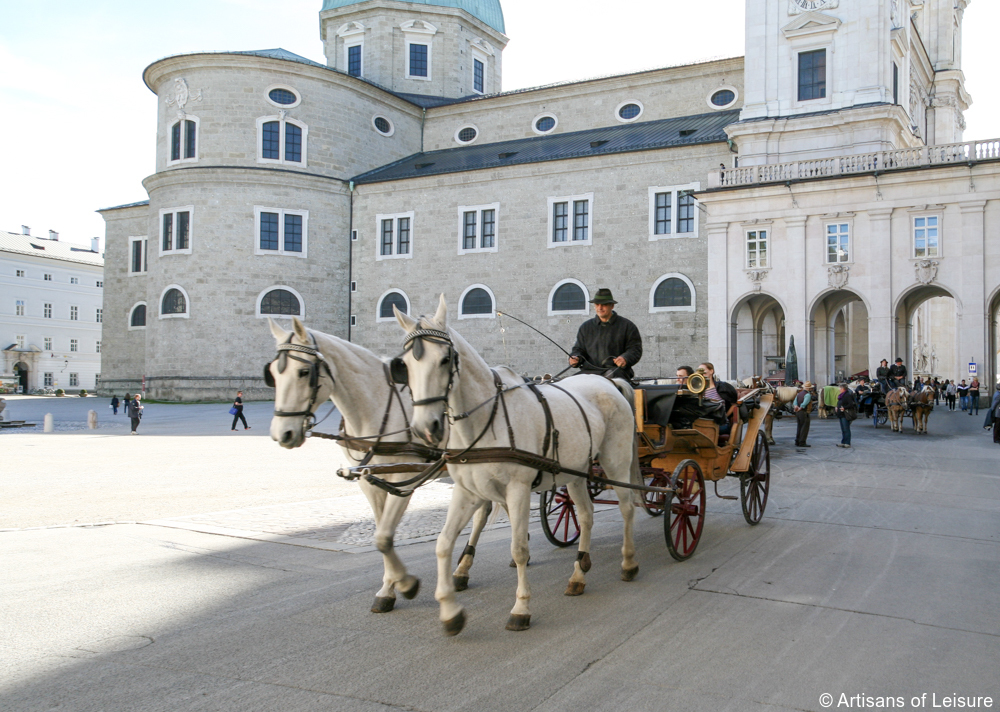