Italy: The Best of the Dolomites 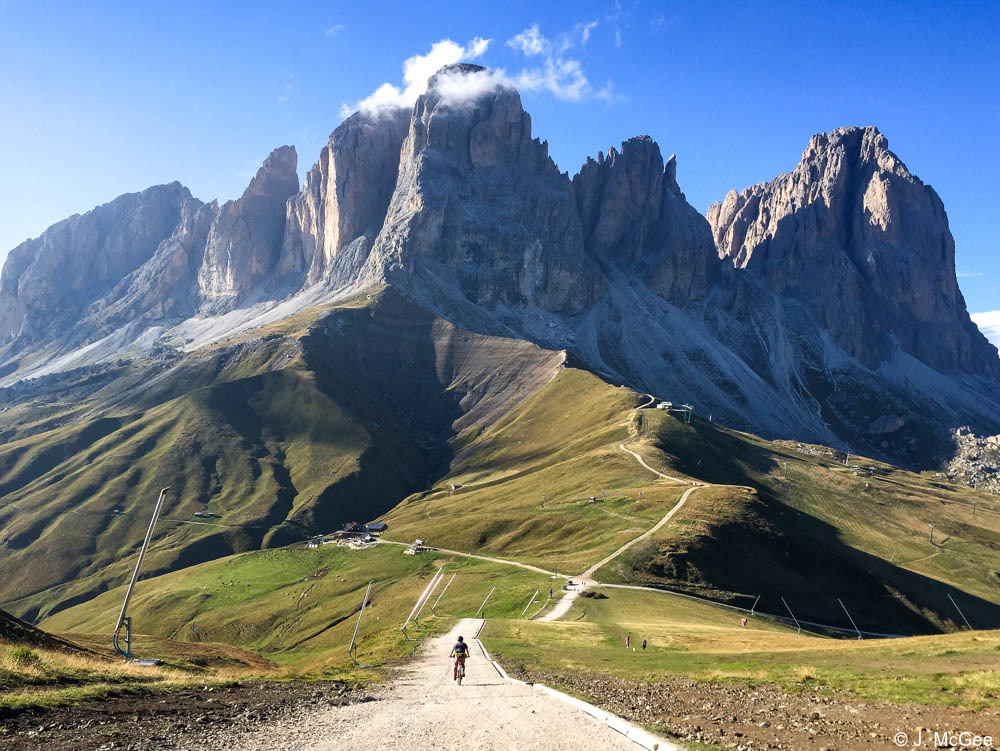 We recently returned from an extended journey through the Dolomites, an incredibly beautiful part of the Alps in northern Italy near the border with Austria.

We enjoyed hiking and biking in the spectacular mountains, sampling excellent regional food and wine, learning about the World War I history of the area, exploring mountain villages, and visiting interesting museums, including one dedicated to Otzi, the Iceman. 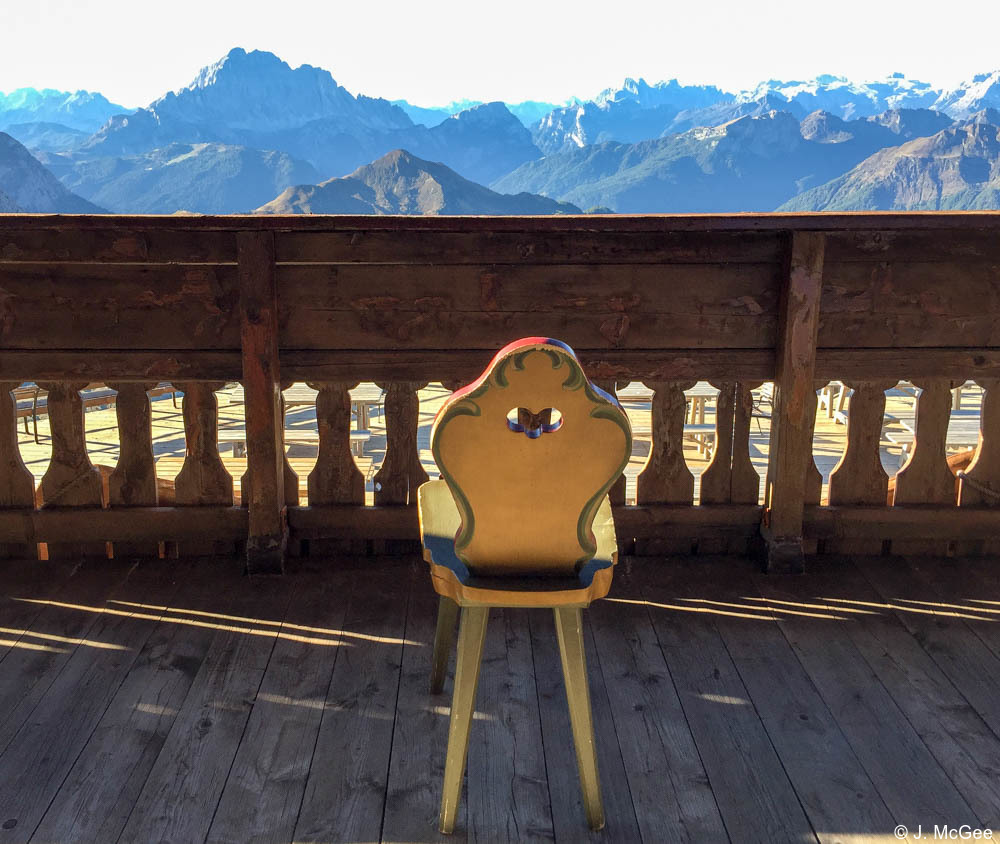 A dramatic landscape of limestone peaks and towers, alpine meadows and forested valleys, the Dolomites have been designated a UNESCO World Heritage Site for their exceptional natural beauty and geological significance. 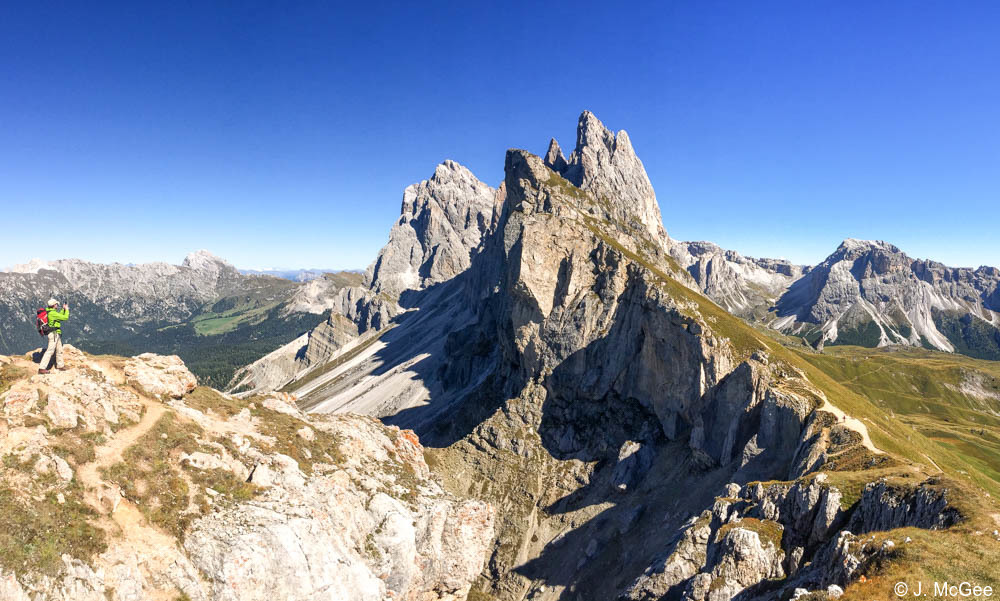 The Dolomites also have a fascinating history and culture encompassed in its two main regions. On the west side, most of the Trentino-Alto Adige/Sudtirol region was part of the Austro-Hungarian Empire until World War I and is still heavily influenced by Austrian culture and the German language. On the east side, the Veneto region is predominantly Italian. In the middle are the Ladins, a smaller group that speaks a language similar to the Romansh of Switzerland. These days, most people living in the Dolomites are multilingual (and usually also speak English). Towns typically have both German and Italian names. 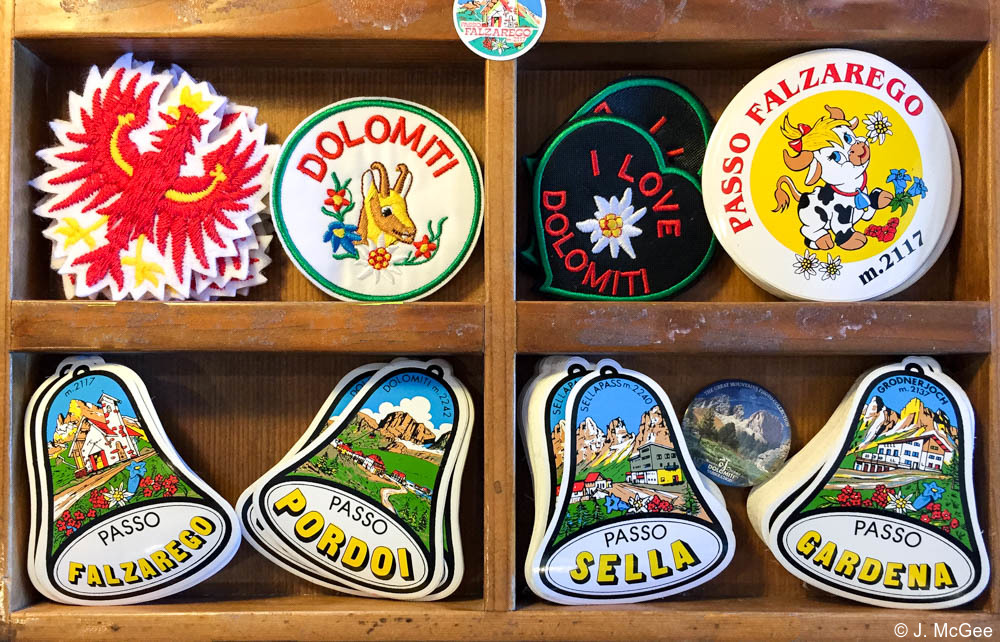 This mix of cultures makes for great food and wine. The region has a high number of Michelin-starred restaurants, and even rustic restaurants and mountain huts serve interesting combinations of hearty local foods such as dumplings, pasta, polenta, cheese, speck and strudel, which are especially satisfying after a long day of hiking and touring. 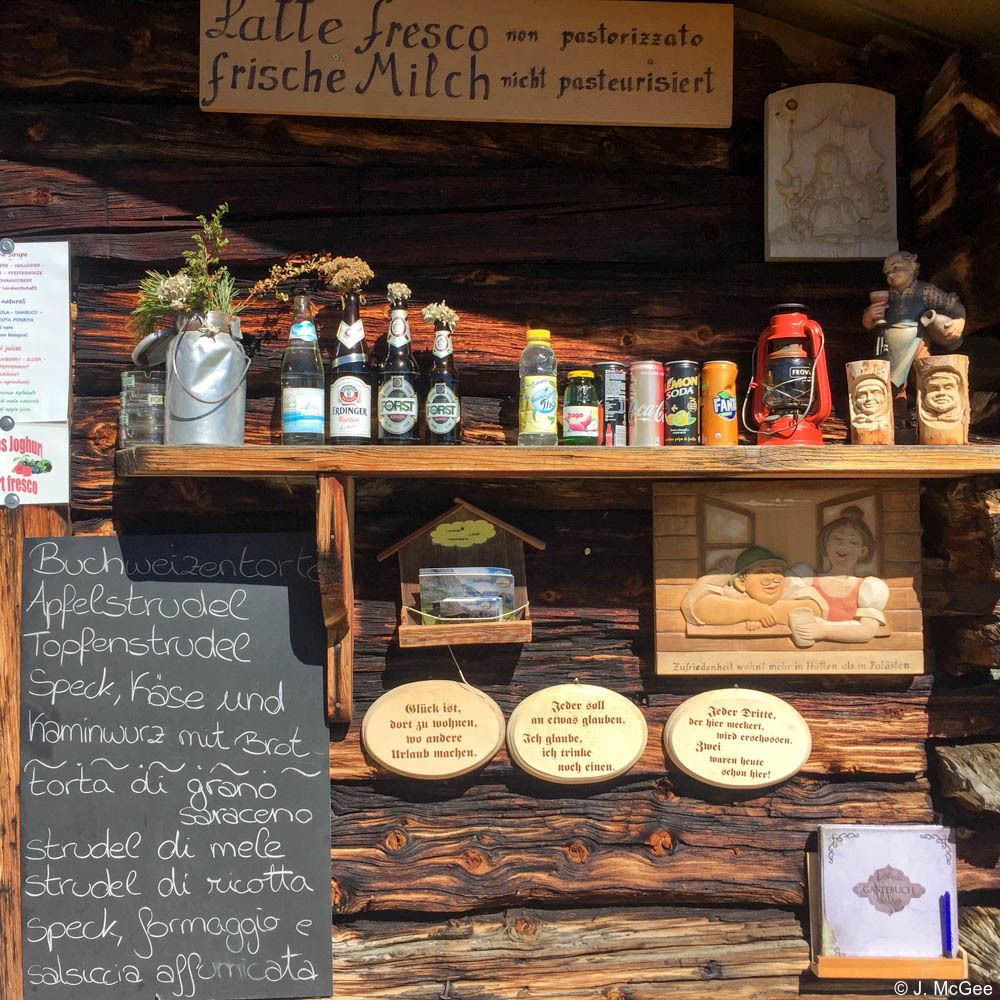 Vineyards drape the lower valleys and slopes in the Alto Adige/Sudtirol region, which we drove through en route to the central Dolomites. Typical wine grapes grown here include reds such as Lagrein, Teroldego and Vernatsch (Schiava), and whites such as Gewurztraminer, Pinot Grigio and Riesling. Restaurants in the region serve many of these wines, and we can also arrange a tour and wine sampling at a local winery. Mountain herbs from the region are used in unusual liqueurs. 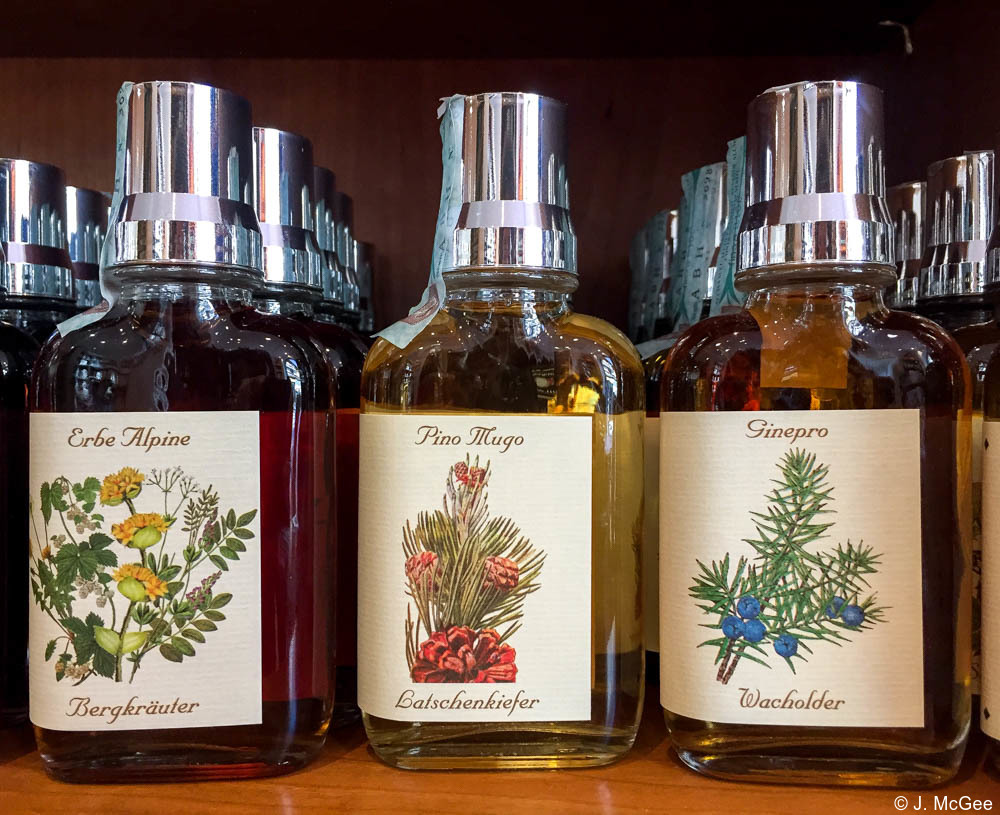 We thoroughly enjoyed our stay at luxurious Rosa Alpina, a family-owned hotel with alpine style in San Cassiano, one of several charming villages in the Alta Badia valley. It has beautiful rooms, a spa and a main restaurant that serves great meals, including a memorable breakfast overflowing with local dairy products, freshly baked bread, local honey and jam, fruit from nearby orchards and farms, and more. 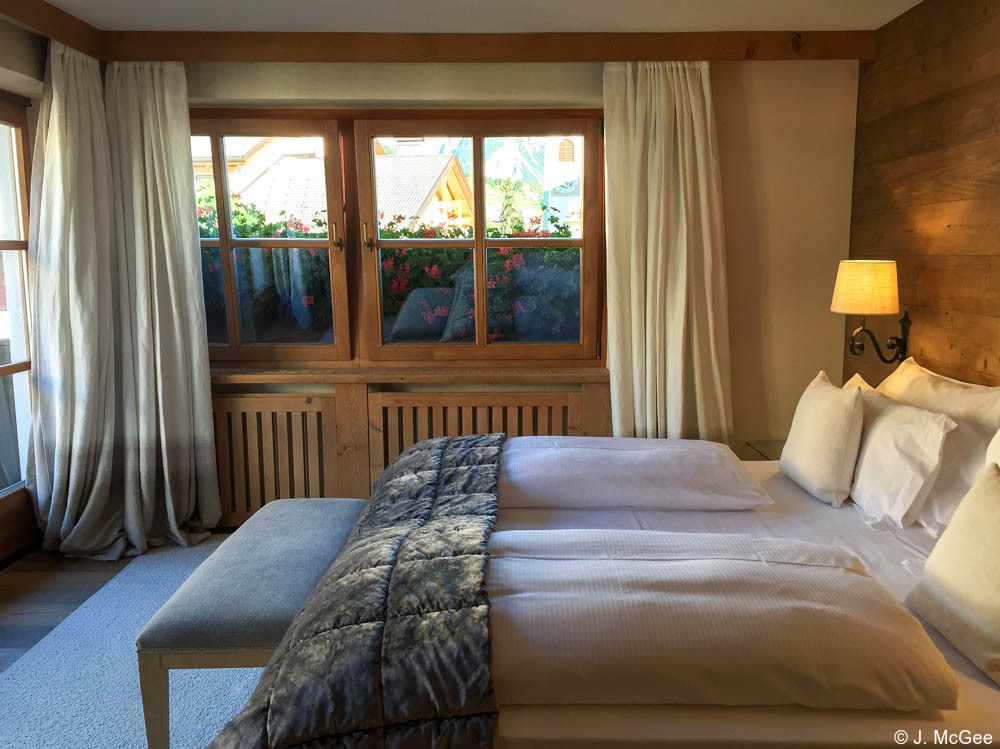 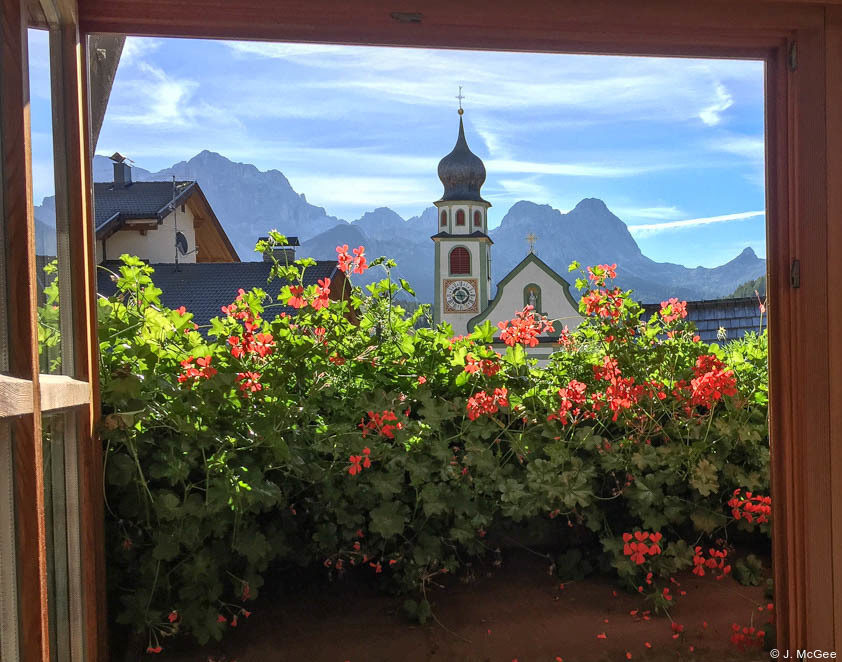 In addition, Rosa Alpina has one of the best restaurants in Italy, the Michelin three-star St. Hubertus. Serious foodies will want to have us make reservations for an exquisite culinary experience that incorporates local produce and meats, as well as alpine herbs and other flavors of the mountains. 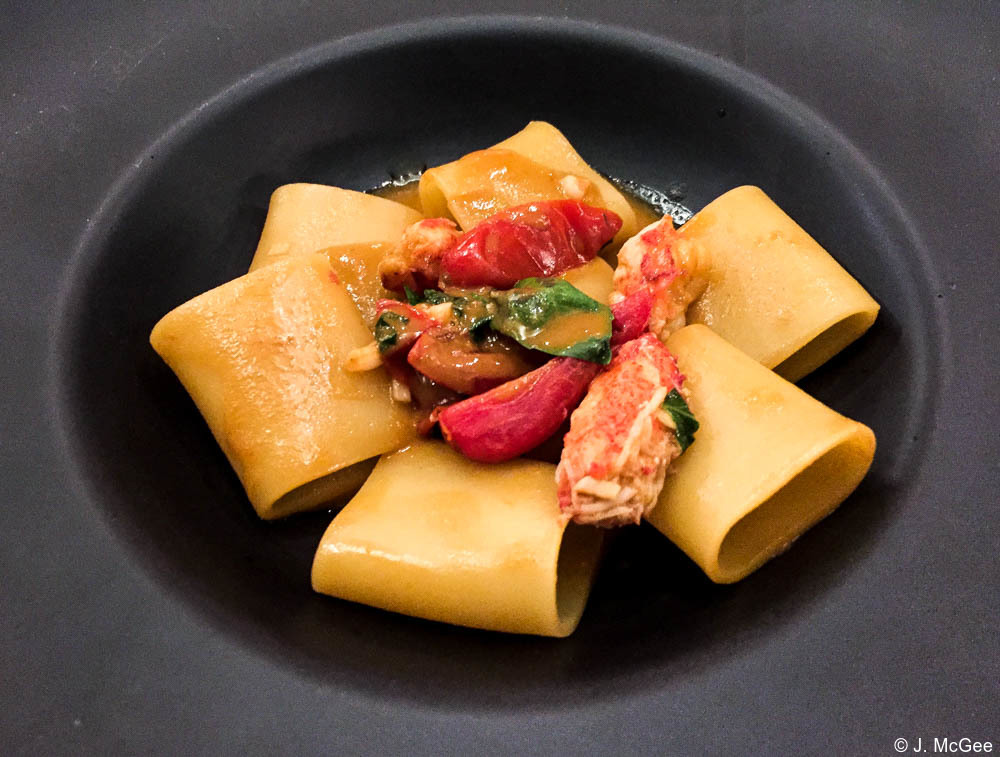 Food-focused travelers will also want to sample typical Ladin dishes such as barley soup, canederli (bread dumplings), and turtres (fried pastries stuffed with spinach or ricotta) at one of the many restaurants in the Alta Badia valley, which is the heart of Ladin culture. 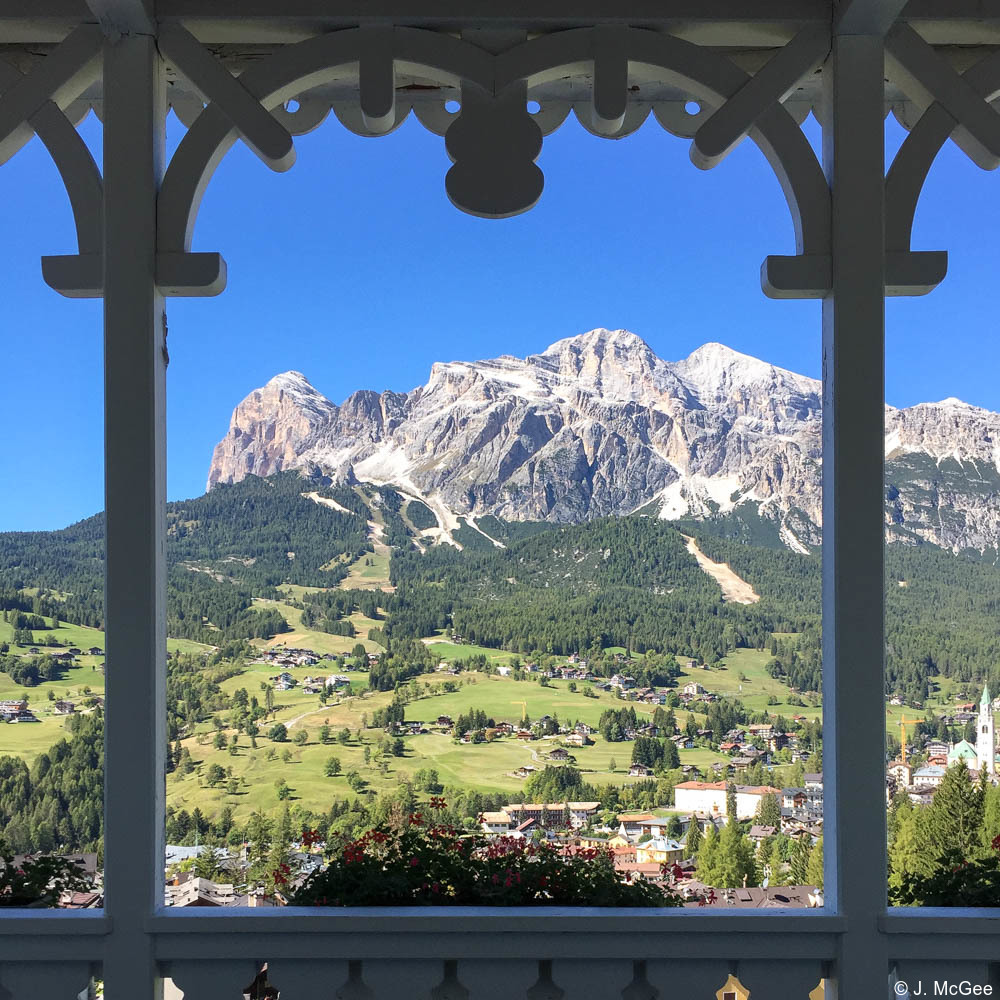 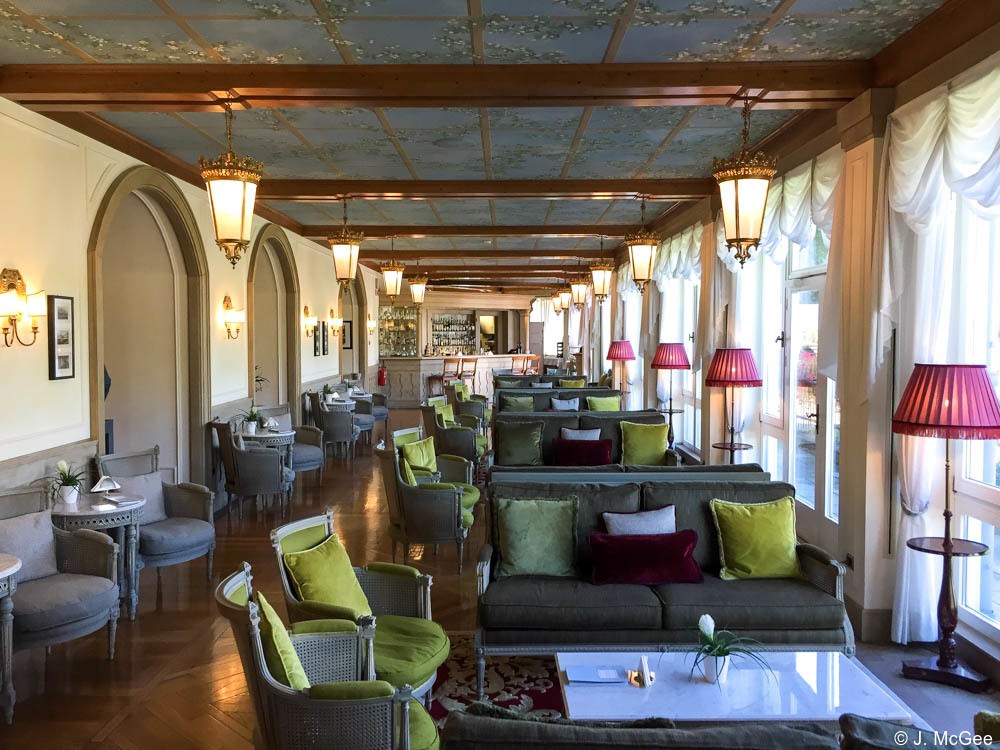 Another of our favorite hotels in the Dolomites is Cristallo, a Luxury Collection Resort & Spa in the town of Cortina d’Ampezzo. It’s in a historic, palace-style building on a hillside with views over Cortina to the mountains.

Exploring the backcountry of the Dolomites on foot and mountain bike was the focus and highlight of our trip. The Dolomites are famous for snow skiing in the winter—Cortina hosted the Winter Olympics in 1956 and will host them again in 2026—and the whole region has an extensive network of cable cars, gondolas and other ski lifts. Many of these lifts also operate in the summer, making it easy for hikers and mountain bikers to reach some of the most dramatic views in the area without exhausting uphill climbs. 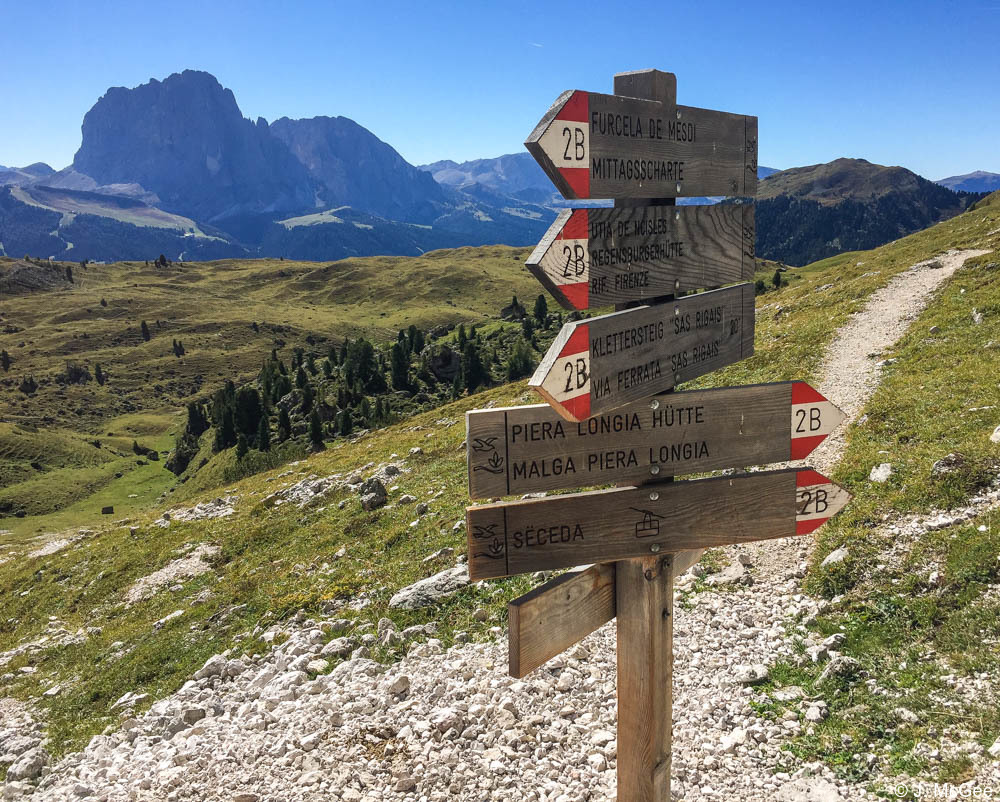 Hundreds of hiking trails crisscross the region, creating nearly endless options for day and multiday hikes. We opted for several day hikes in favorite areas around Val Gardena, such as Puez-Odle Nature Park, to take in views of the Alpe di Siusi (Seiser Alm) alpine plateau, the beautiful Sassolungo and Sassopiatto peaks, and the particularly photogenic Odle Group. 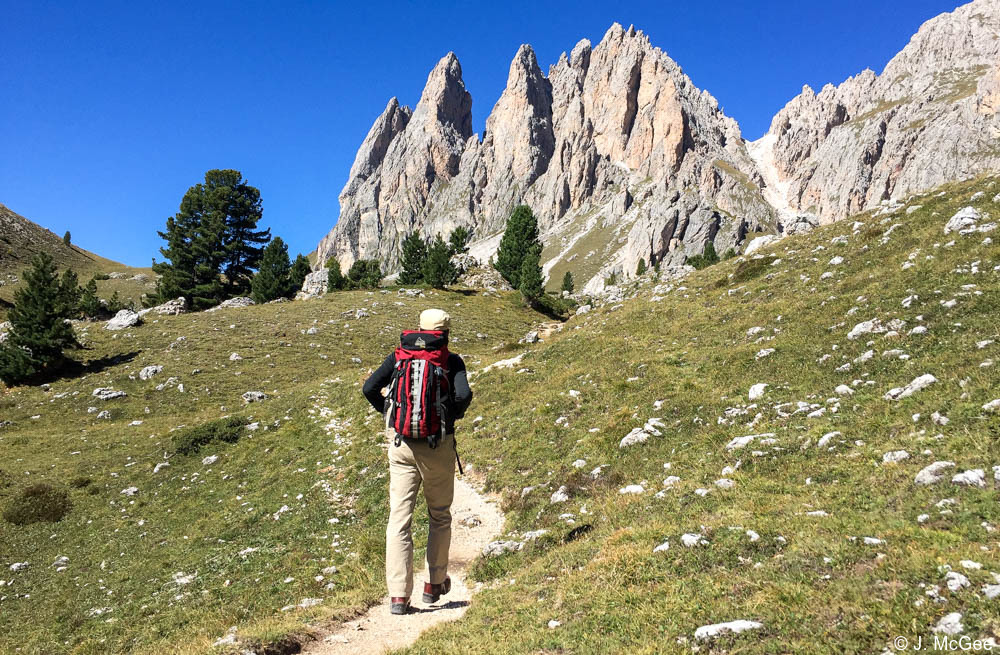 The rocky prominences above tree line reveal the geology of the limestone mountains, which were formed by the fossilized remains of an ancient coral seabed. Tectonic forces then uplifted many parts, and glaciers later carved the U-shaped valleys. 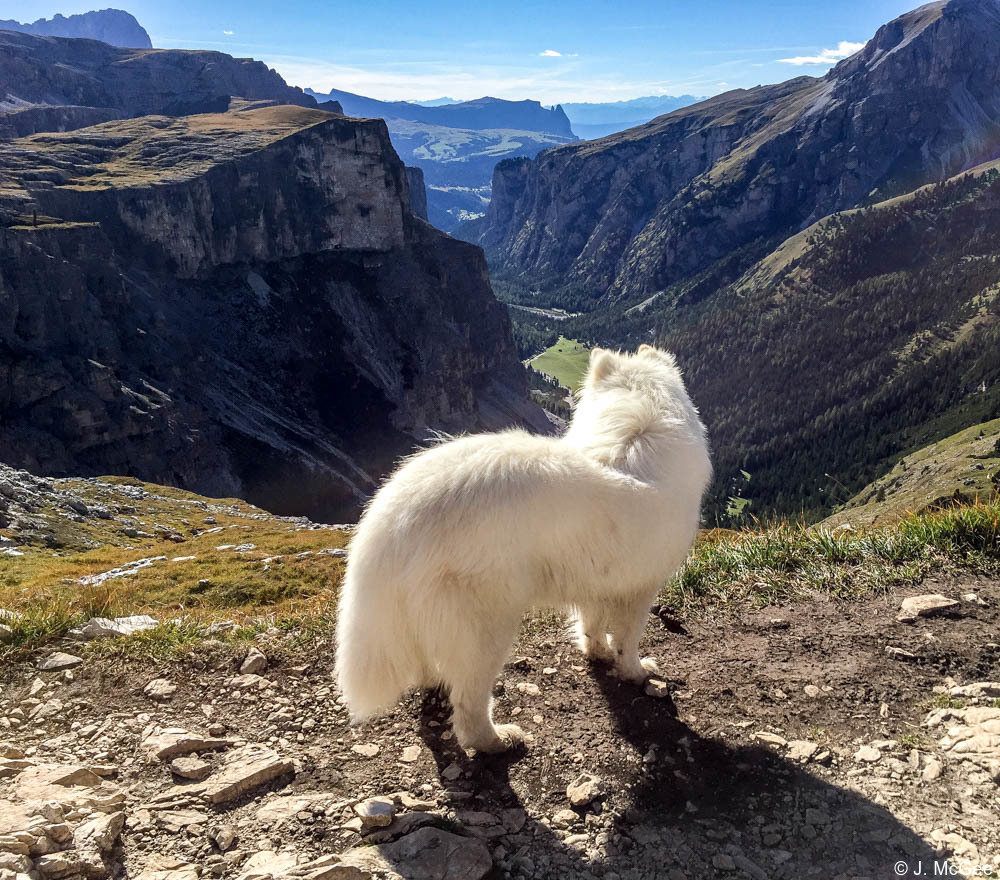 Another favorite hike was around the breathtaking Tre Cime di Lavaredo formation, which was featured as a backdrop in the film Solo: A Star Wars Story. We saw rock climbers tackling some of the big walls on the three peaks, the tallest of which rises to 9,839 ft (2,999 m). 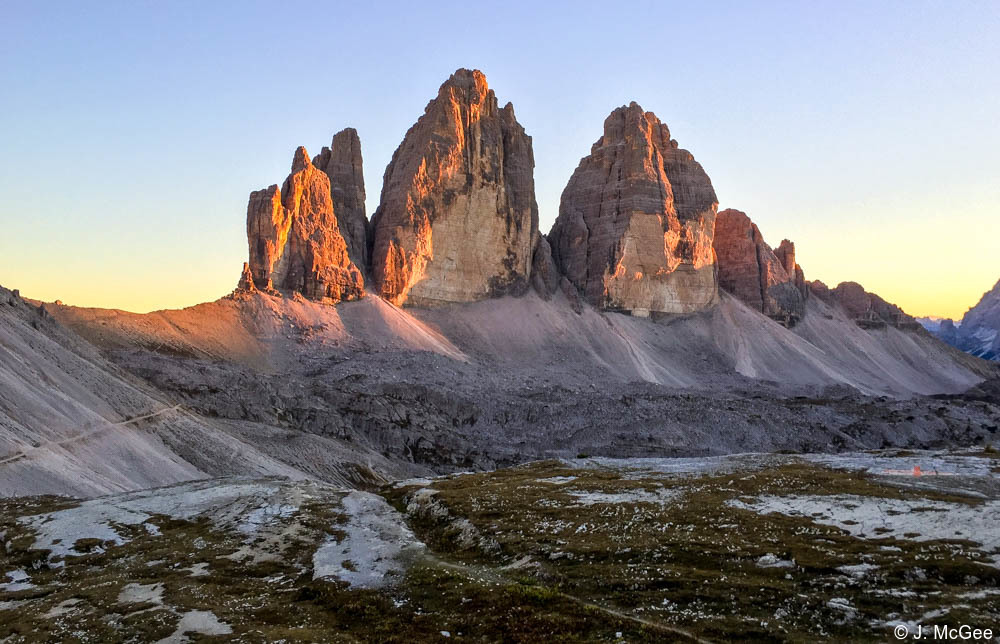 Along several trails, we explored the World War I history of the Dolomites in outdoor museums with trenches and caves used by the Italian and Austro-Hungarian soldiers. The armies battled across narrow valleys, but the winter weather was often their most lethal adversary. 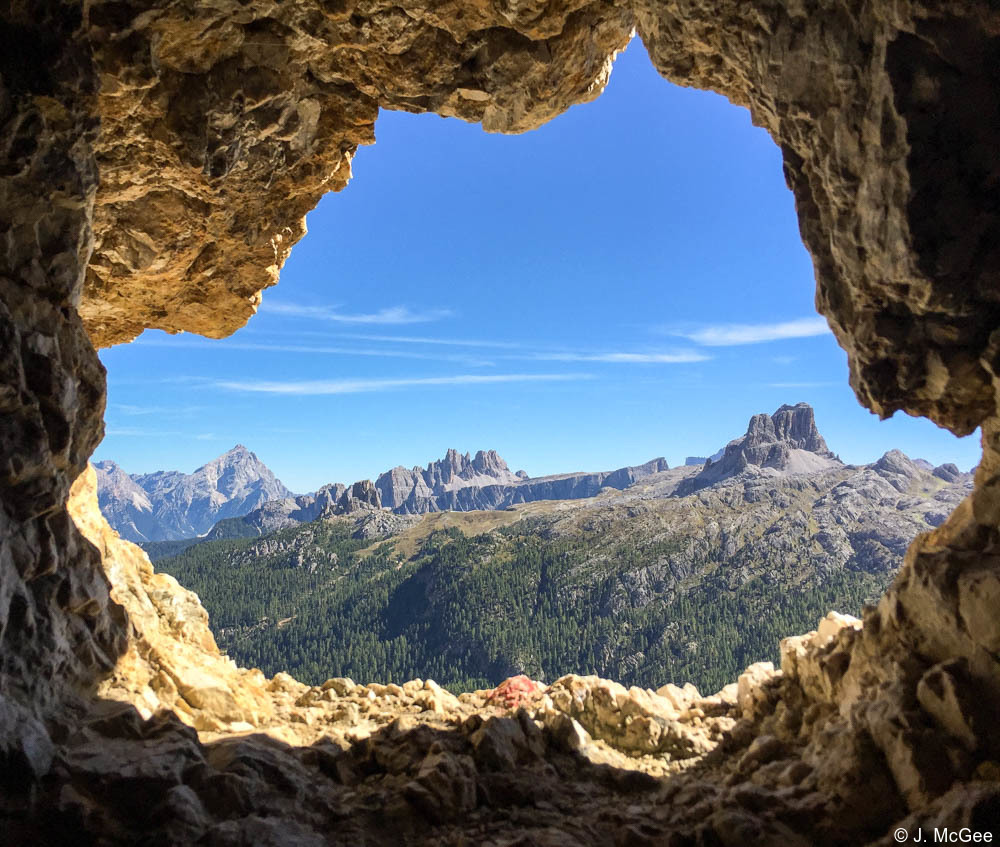 Rifugios (mountain huts) high in the hills serve hearty meals for lunch, accompanied by panoramic views. We opted to hike to and overnight in several huts, which allowed us to watch incredible sunsets, when the “pale mountains” (as they are known in Italian) burn with the vibrant oranges, pinks and purples of the reflected light. 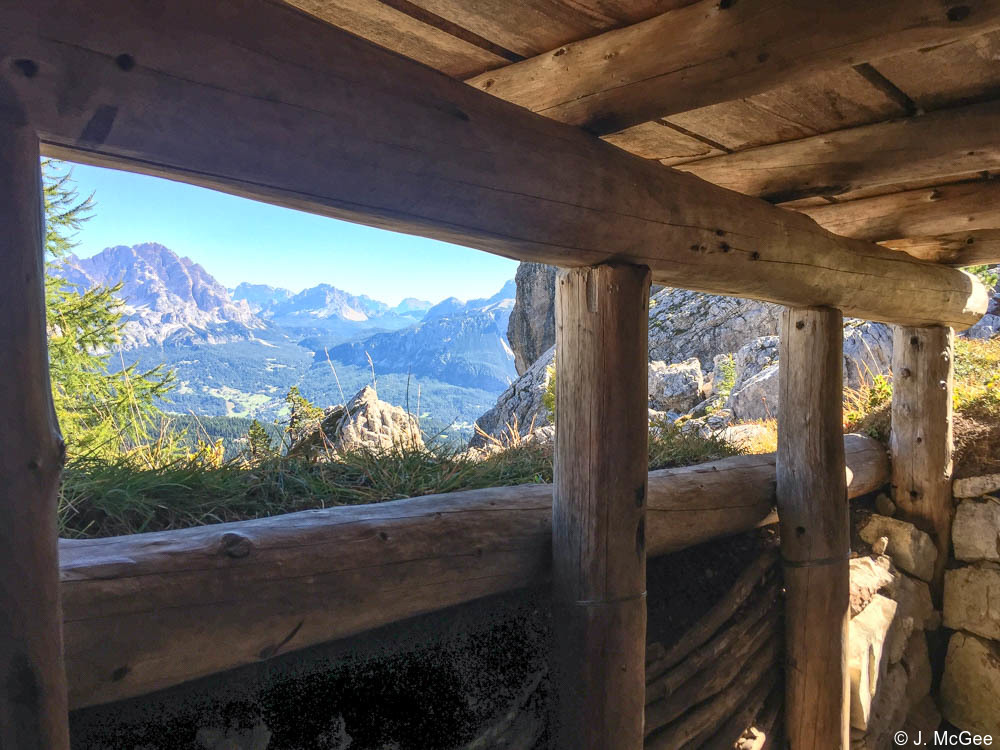 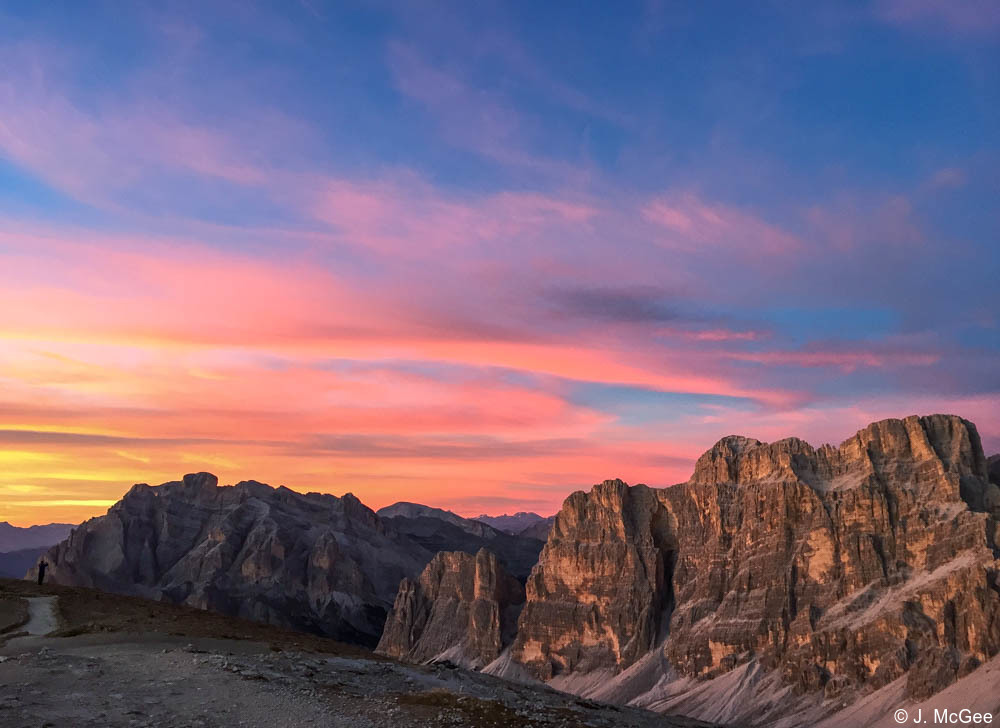 Hiking in the Dolomites affords many opportunities to see delicate wildflowers and wild animals. We were fortunate to spot a chamois (a kind of mountain goat) on a talus slope, and we saw many alpine choughs, a type of corvid (crow) that frequents the mountain huts. 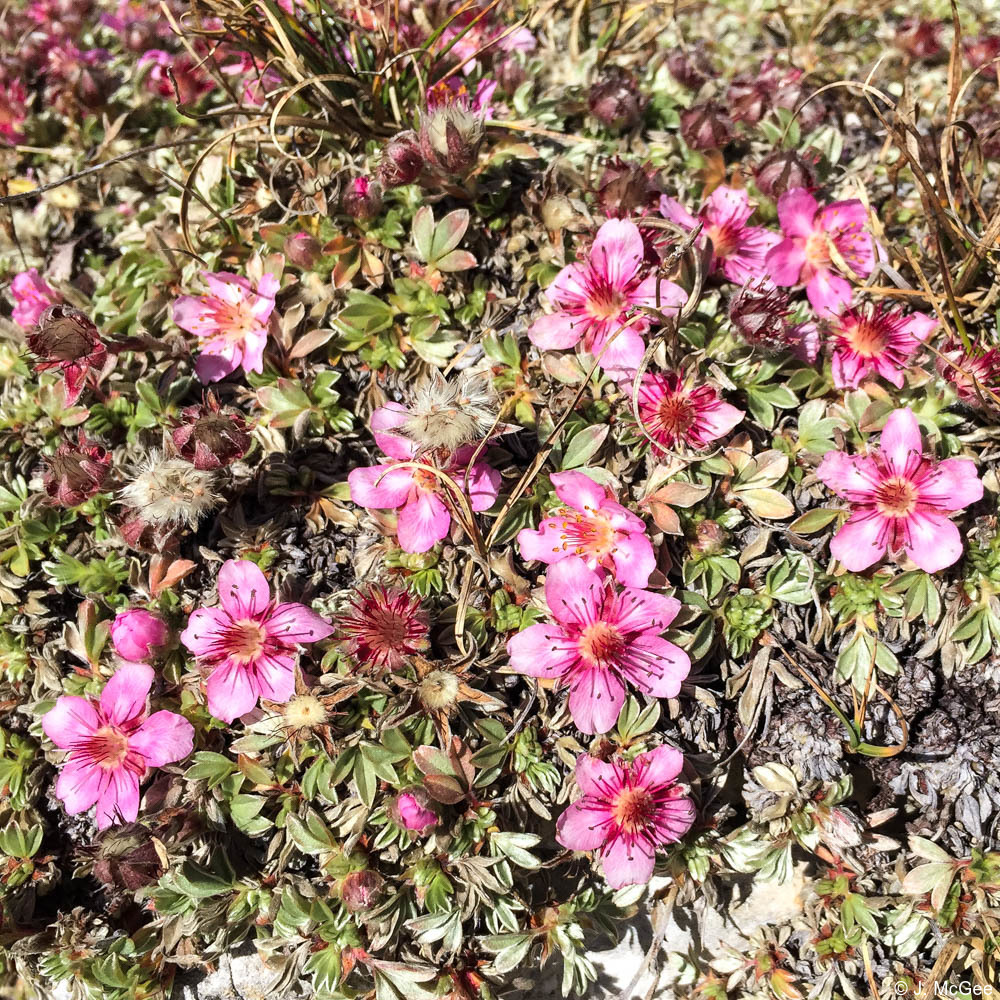 We also ventured on a day-long mountain bike ride known as the Sellaronda because it circumnavigates the Sella massif. (In winter, skiers make the same circuit on the snow.) Lifts took us up, and we biked down most of the way, riding over beautiful passes and along ridgelines with endless views. E-bikes make the slopes even easier for travelers who may be less fit but still want to ride. 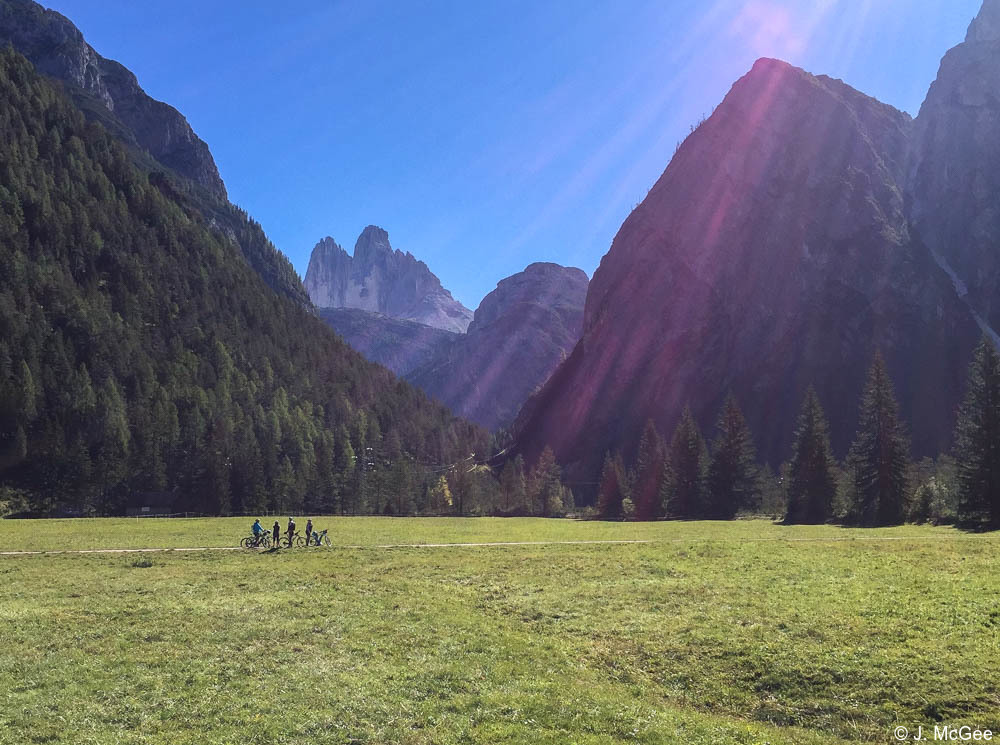 Numerous villages dot the valleys between the mountains, many of them preserving age-old customs and traditions, such as wood carving. Among the many charming villages in the Dolomites we visited were Ortisei, Selva di Val Gardena and Canazei, as well as San Cassiano, Corvara and Colfosco in the Ladin-dominant Alta Badia valley. 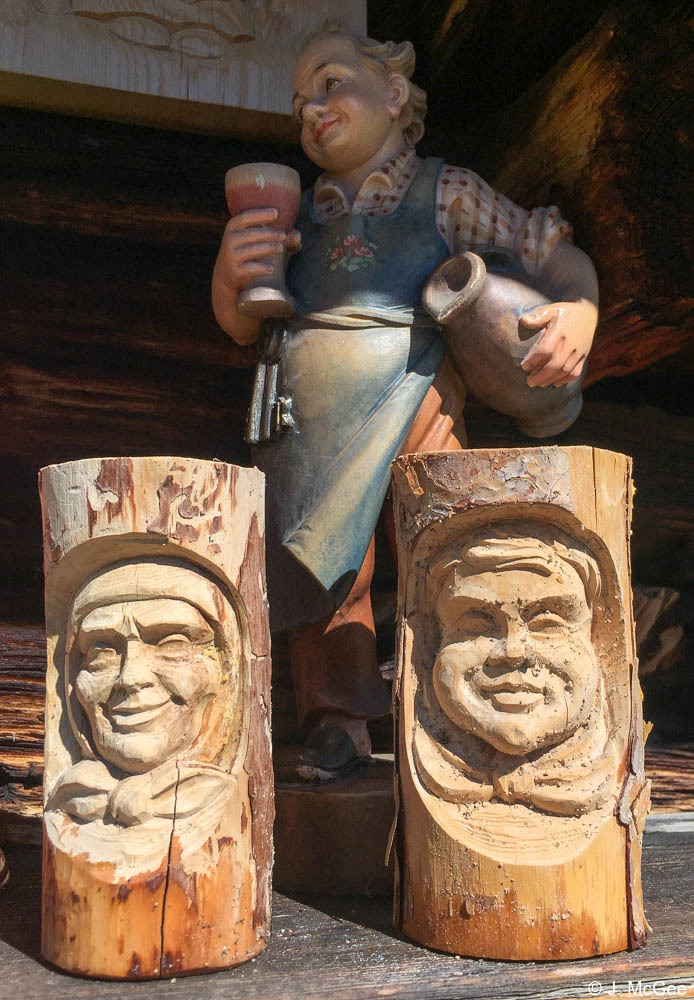 One day, we visited MMM Corones, a museum of mountain climbing designed by renowned architect Zaha Hadid that’s perched on top of a mountain and accessed via gondola. It had interesting gallery spaces inside and panoramic views of mountains and paragliders outside. 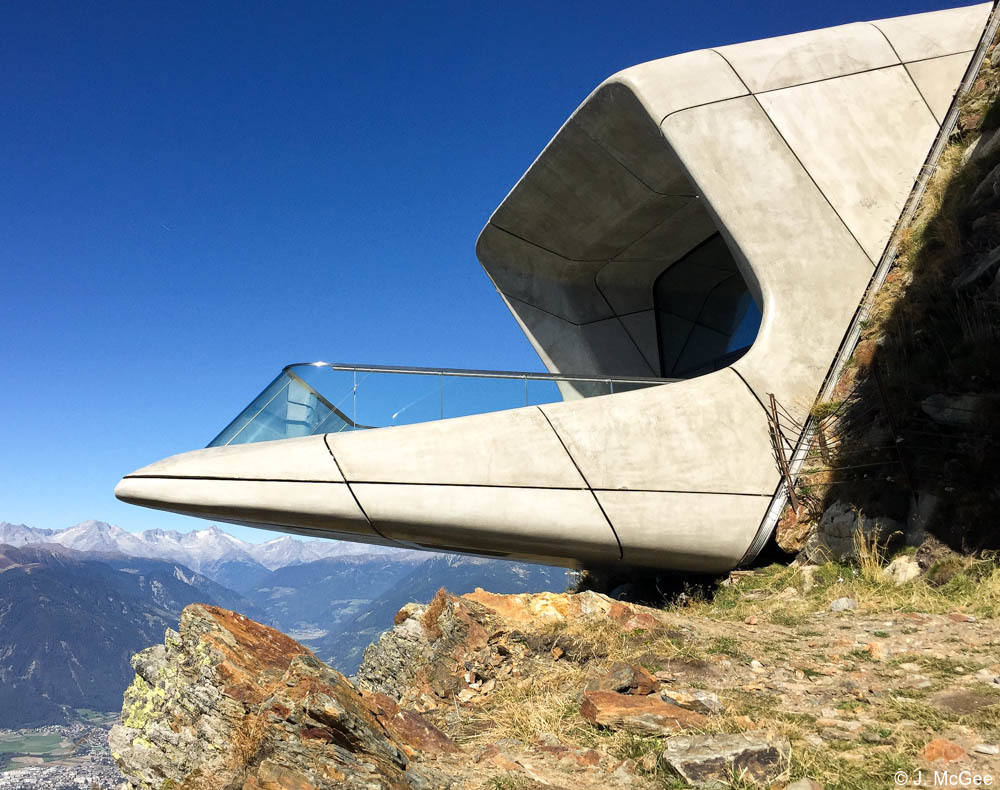 En route between hikes, we stopped by several mountain lakes in the Dolomites, including the unforgettable Lago di Braies (also known as Pragser Wildsee) and its striking blue water. 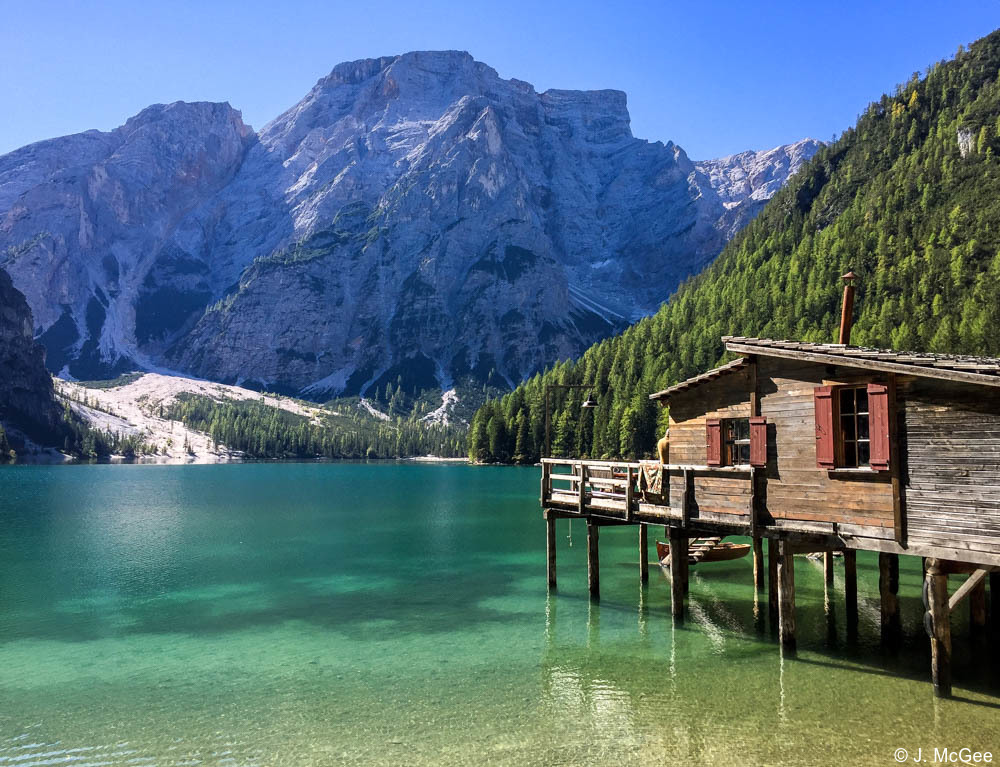 We also spent time in Bolzano, a small city in the heart of the Alto Adige/Sudtirol region that acts as a gateway to the west side of the Dolomites. The medieval historic center is lined with Baroque buildings, and a market often fills the streets with fresh produce, dried meats, pasta, mushrooms, cheese and other local foods. One young man was selling fresh chestnuts from his family farm. 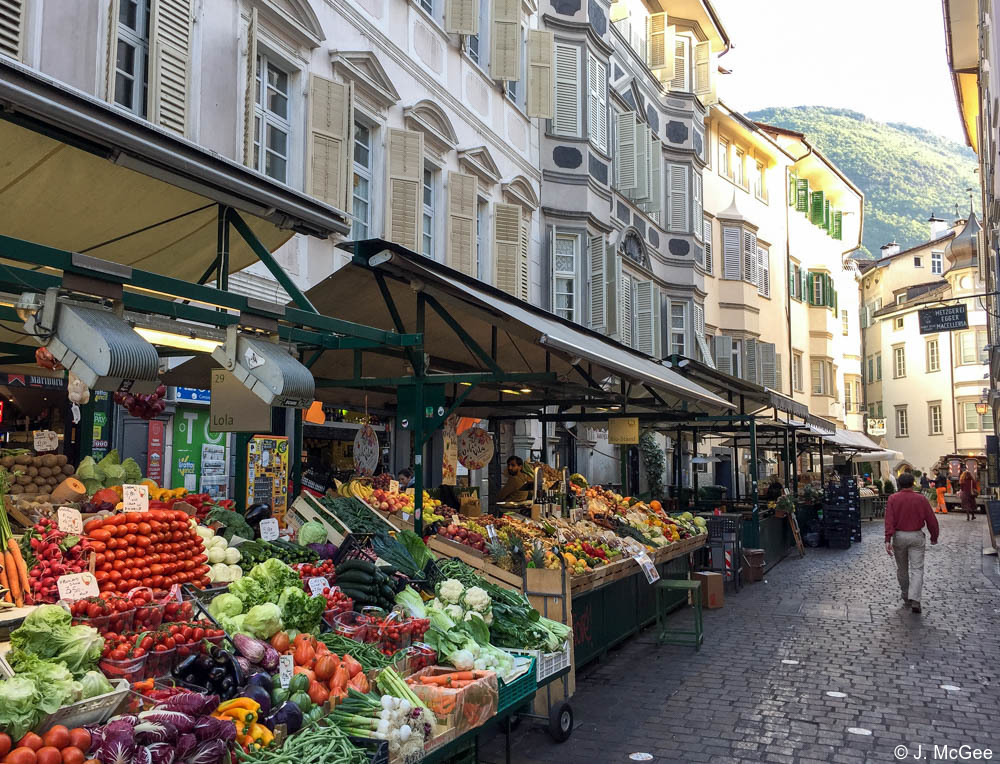 One of the highlights of Bolzano is the South Tyrol Museum of Archaeology, which focuses on Otzi, a 5,300-year-old mummy also known as the Iceman. In 1991, Otzi was discovered frozen in a glacier, complete with his Copper Age clothing and tools. We toured the museum to see the well-preserved mummy and informative displays that explained his life—and suspicious death—based on clues from his clothing and forensic analysis. 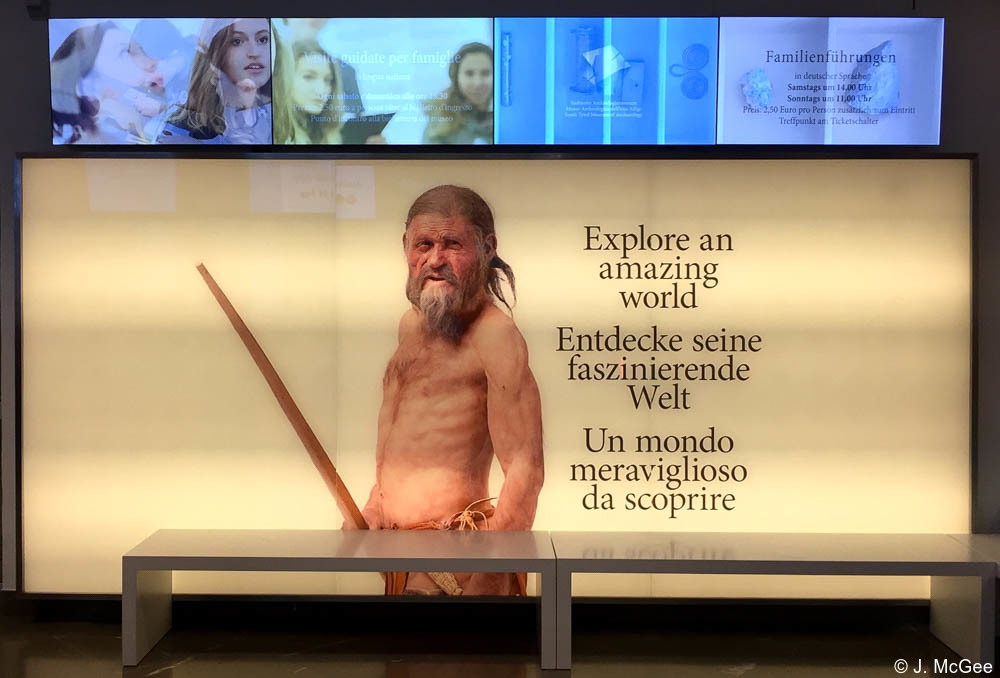 The other main gateways to the Dolomites are Venice, Innsbruck, Milan and Munich, making the mountains region an ideal combination with other parts of Italy, as well as Austria and Germany. 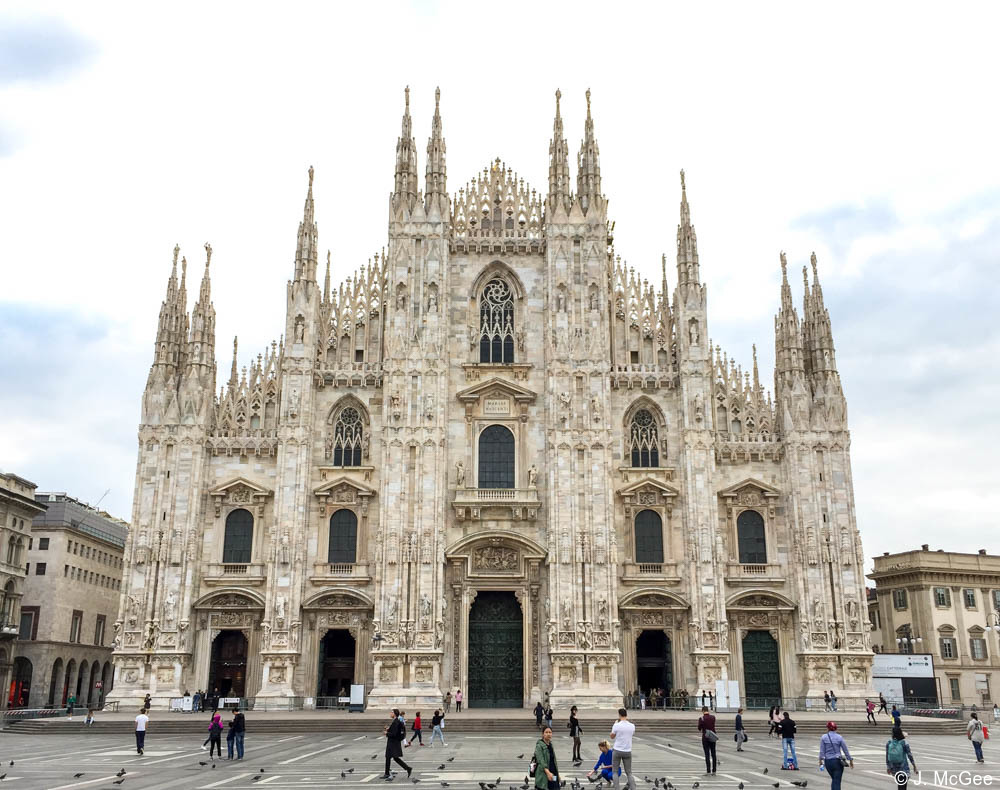 The Dolomites is vast and offers an overwhelming number of great options. We’ve recently launched private Dolomites tours that capture some of the most beautiful and memorable experiences in the region. We can also customize an itinerary to visit other parts of the Dolomites, depending on your interests.

Contact one of our Italy travel specialists to begin planning a private tour in the Dolomites.