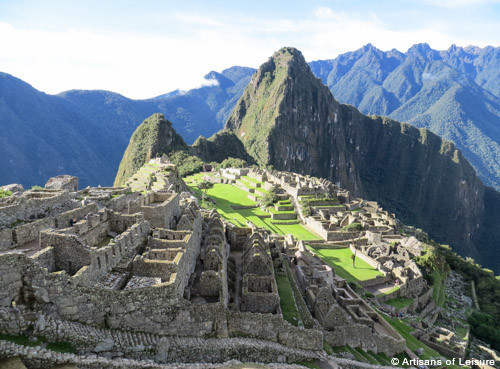 One of the highlights of touring in Peru is learning about the country’s important archaeological sites while accompanied by an expert guide. 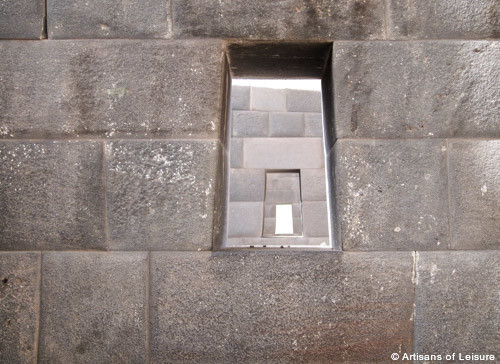 Peru has been home to many important and powerful civilizations, including the Chavin, Moche, Nazca and Chimu.

The best-known ancient Peruvian civilization is the Inca Empire. Inca heritage is still apparent in the stone streets and architectural foundations of Cusco, the former capital of the Inca Empire. The Incas were remarkable stone masons. Working without mortar, they built their structures to survive earthquakes. 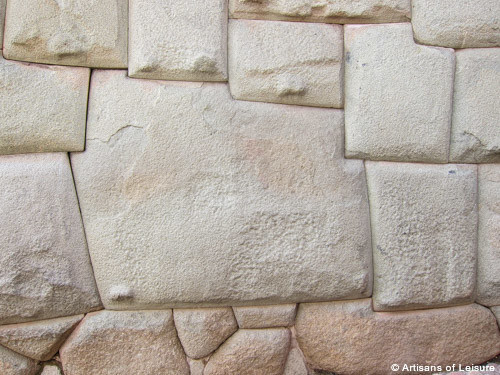 One of the techniques the Incas used to create durable structures was fitting polygonal stones together at multiple surface points. During private touring in Cusco, our guides point out one of the most impressive examples of Inca masonry: a 12-angled stone set in the wall of a former Inca palace.

The Incas built openings narrower at the top and wider at the bottom, another technique to protect against earthquakes. They used this technique with great precision, as in the doors and windows of Koricancha, a temple and astronomical observatory dedicated to the sun god Inti, the most revered deity in the Inca pantheon. 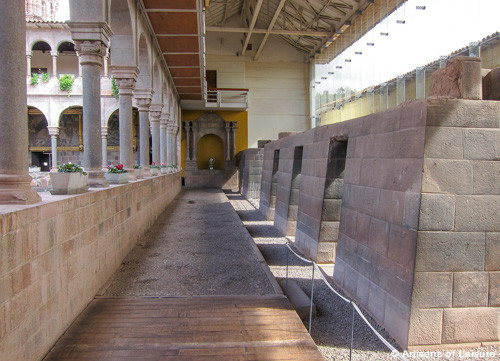 The most important and elaborate temple in the Inca Empire, Koricancha was once heavily decorated in gold (koricancha means “courtyard of gold” in the local Quechua language). In the 16th century, the Incas removed much of the gold to pay the Spanish conquistadors a ransom for their captured ruler, Inca Atahualpa. The Spanish then looted Koricancha’s remaining wealth and built the Church and Convent of Santo Domingo atop the temple. The resulting complex is a jarring visual history lesson in conquest and defeat.

Close to Cusco is the Sacred Valley, which offers fascinating archaeological touring set against the magnificent backdrop of the Andes mountains. One of the most important sites in the region is the royal fortress and temple of Ollantaytambo. Building began in the 15th century, and the quarrying and transporting of the massive stones was a major feat of engineering ingenuity. Thanks to its strategic location, Ollantaytambo was one of the few sites of Spanish defeat, as the Incas rained arrows, spears and stones on the conquistadors below, and then flooded the plain, miring the Spaniards’ horses. 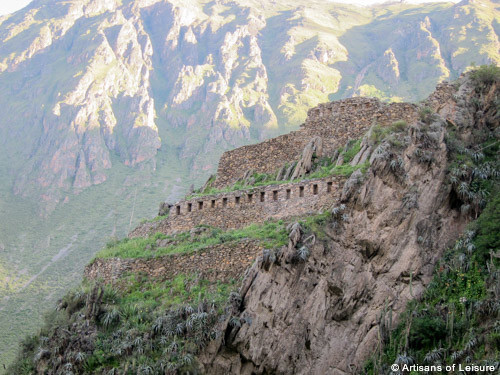 A bustling town still occupies the site of the original village, and many of the streets and architectural foundations are original Inca constructions.

Of course, the most famous and important of the Inca archaeological sites is Machu Picchu. Set atop a steep ridge in the Andes, the location is as mysterious and alluring as the enigmatic history of the ruins. Machu Picchu was constructed in the 15th century and then abandoned, but no one knows exactly how it was used. Theories include that it served as a bunker for the Inca ruler or as a ceremonial and agricultural center. 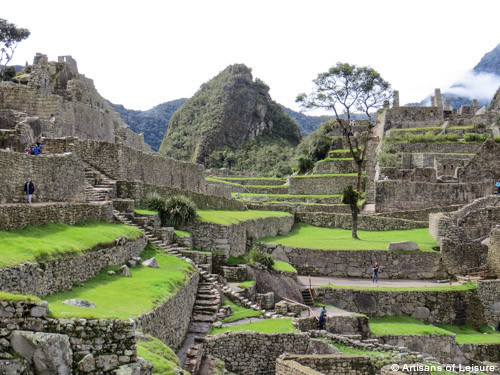 The citadel is divided into upper terraces used for agriculture and lower terraces used for residences. The fine craftsmanship of the Incas is evident throughout the complex. Buildings feature heavier, larger stones anchoring their bases, with lighter, smaller stones on top. 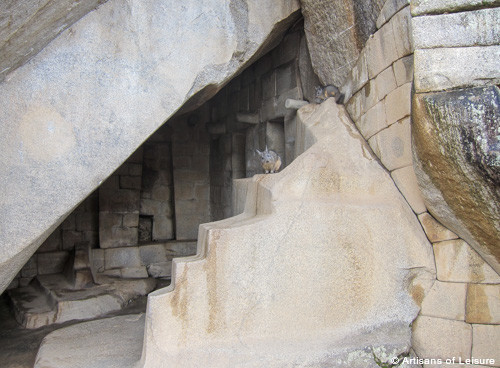 Upon request, Artisans of Leisure can arrange for clients to hike Huayna Picchu, the mountain looming over the citadel, with a private guide. The view from the top is magnificent. 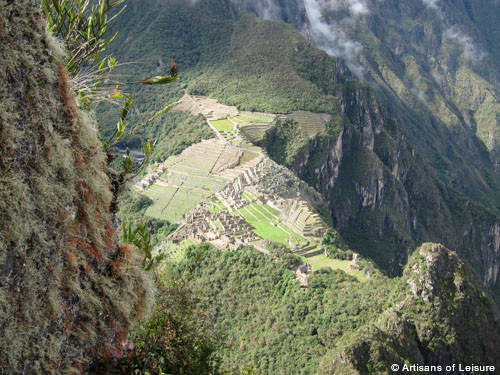 Peru is home to another mysterious archaeological site, the famed Nazca Lines. These geoglyphs were believed to have been formed from around 500 B.C. to 500 A.D. by members of the Nazca culture. The lines were created by moving the red pebbles that cover the plateau, revealing the lighter-colored ground below. There are more than 70 designs, including images of humans, fish, birds and animals, as well as hundreds of lines and shapes. Limited rain and wind in the area has helped preserve the Nazca Lines. Though scholars are unsure of the exact purpose of the Nazca Lines, a recent theory posits that they were created as part of ancient rituals to pray for water. Artisans of Leisure arranges flights over the plateau for the best view of the Nazca Lines. 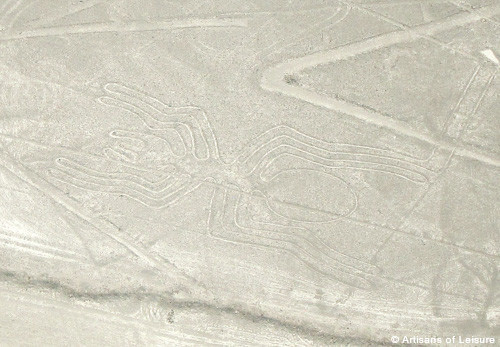 The Candelabra geoglyph is found in nearby Paracas. Despite apparent similarities, it is believed that there is no relationship between the Nazca Lines and the lines created by the Paracas culture centuries earlier. Archaeologists believe that the Paracas lines were markers to help travelers find ceremonial and trading centers. 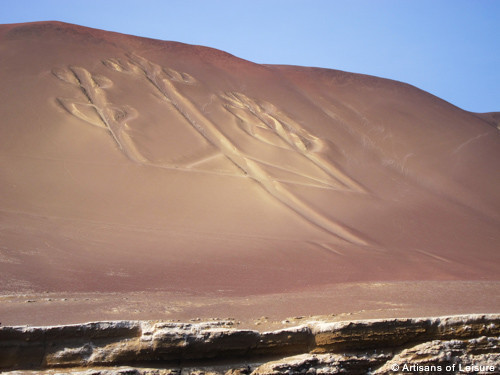 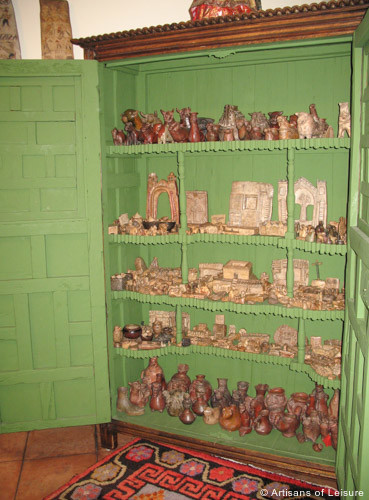 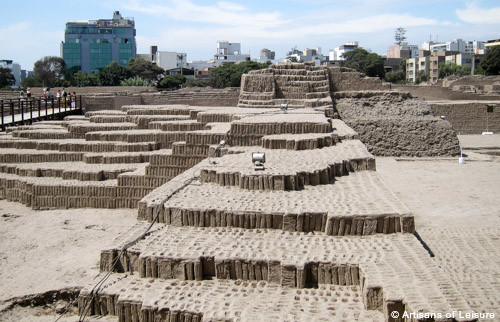