Spain Through the Eyes of a Sixth-Grader

More and more Artisans of Leisure travelers want their private tours to include activities based on their passions. 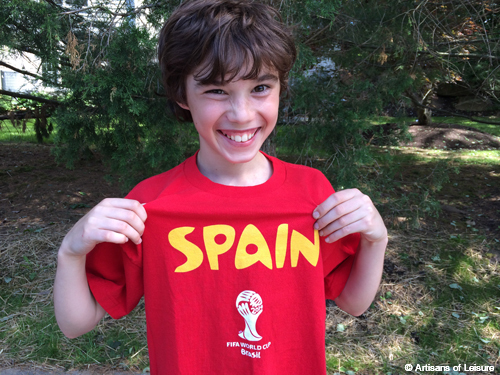 One such traveler is Derek S., an energetic sixth-grader who loves soccer. Last spring break, Derek’s parents surprised him with an Artisans of Leisure private tour of Spain that included Madrid, Barcelona, Toledo and Valencia. 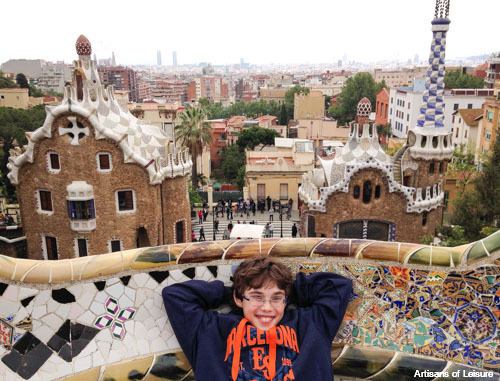 We recently spoke with Derek for more insight into what he loved about his trip, including not only soccer, but also Spanish food, art, architecture and more:

Q: What’s your favorite thing to do?
A: Play soccer. Obviously.

Q: Who is your favorite team?
A: Chelsea. Definitely.

Q: Why?
A: I don’t know. I just love them. I have so many Chelsea shirts and Fatheads and balls.

Q: What are Fatheads?
A: Things that stick to your wall. Like a sticky poster.

Q: How did you find out you were going to Spain for spring break?
A: My parents told me.

Q: What were you most looking forward to in Spain?
A: The games. I went crazy when I found out we’d see both teams play against each other.

Q: Who were you rooting for?
A: Real Madrid.

Q: Why?
A: I thought they were the underdog, and I wanted them to win. Which they did. Two to one. 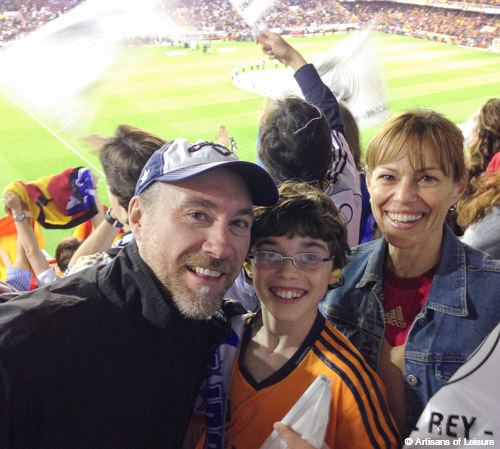 Q: What was the highlight of the game?
A: When it was 1-1, then they scored in the 88th minute, and Barcelona hit the post shortly thereafter. But the second goal. 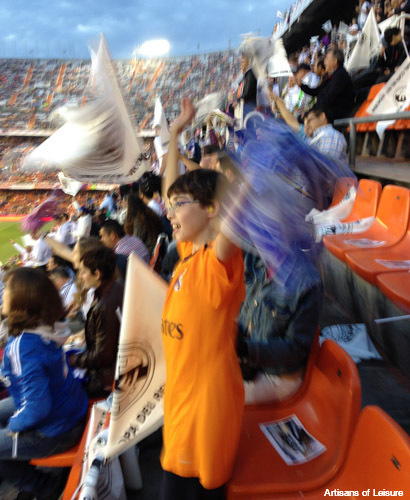 Q: Tell us about your favorite meals.
A: All sorts of paella, especially the cooking class in Valencia learning Valencia paella (chicken, rabbit, lima beans, other beans) and the seafood paellas in restaurants.

I loved marzipan desserts. I had it in Toledo. I had marzipan cake at Adolfo. So good. The other marzipan were other assortments. They look different but they all taste the same. Excellent. I love marzipan now. This was the first time in my life I had it. I never knew what it was. 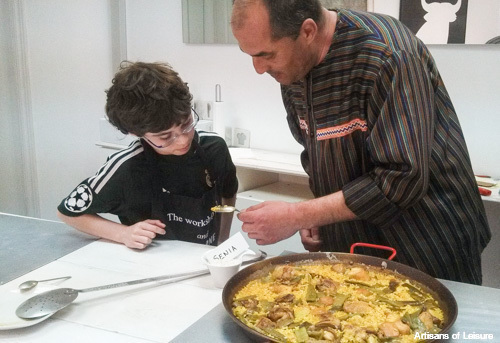 Q: Did you get to play at all? Soccer?
A: Sure. Yeah, sometimes on the beach I got into games people were playing. On the street I saw someone kicking, and he passed it to me, and we started playing freestyle street soccer.

Q: Tell us about the hotels.
A: I liked all of them. They all had great breakfasts. Tons of stuff. Fruit. Sausages. Pancakes. Mini donuts. Crepes. Bread. Even Japanese food and samosas. So good.

The people were so nice. They were very welcoming, especially at Hotel Arts in Barcelona. They had me answer questions about my favorite color, animal, etc. They showed us all around. I loved the club lounge. There was a corner with lots of food‎ and some was piled high with other food around it. I liked their soup at lunchtime. Cream of cabbage. Also, the ham and their pastries (croissants and donuts).

Q: What did you do during the winery visits?
A: Well, for me it wasn’t that fun. But Jean Leon and Albet I Noya both had cool underground rooms with wine tanks. They gave me grape juice in a wine bottle and chocolate eggs for Easter.

Q: Tell us about Toledo.
A: We saw a lot of buildings. There were so many. The cloister nuns were cool. They lived in a room that was locked up. It was their choice. They live there for their whole lives. All they do is make and sell marzipan and communion crackers. I met a nun and she gave me some. The guide introduced me. They only leave if they have a doctor’s appointment or something.

We saw the armor and helmets. Lunch was great. Adolfo. Really good. I had duck liver and pig. And the marzipan cake for dessert. It was so good. It was different colors and shades as you ate deeper. 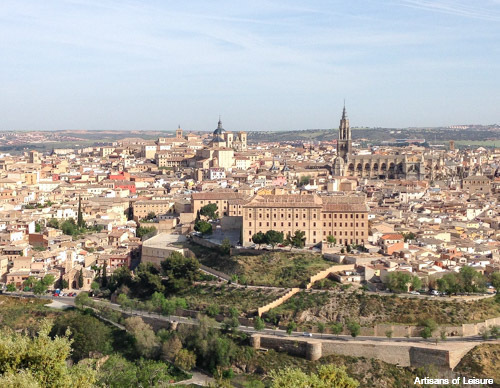 Q: What about Valencia?
A: The game was awesome. During the touring we went to the harbor to the marina. We went to an open area mall, and they had an exhibit for game day about the Copa del Rey and the teams, and they had a mini store. We went to the market and we saw a real pig’s head with its nose, pigs’ feet, live eels, shells. ‎They also had real snails moving around in a bucket. We saw a science museum, opera house, aquarium. I went into a giant bubble. I loved bouncing inside and pretending it was TNT and would blow up. 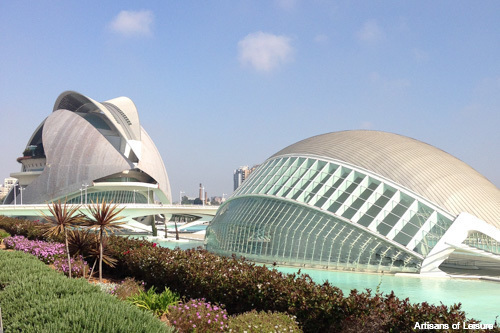 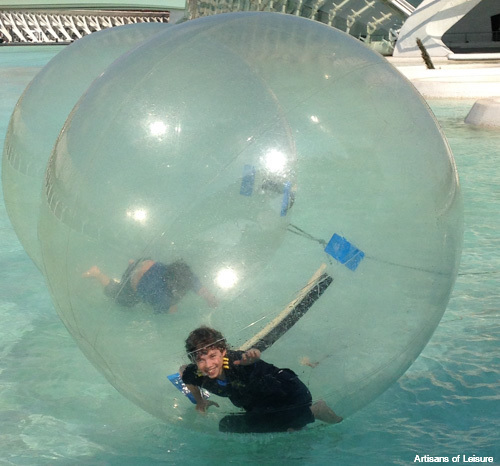 Q: Tell us about Barcelona.
A: Gaudi. Antoni Gaudi. My favorite artist. We saw a bunch of his things. For Easter, we saw Mass in Catalan in the Sagrada Familia. We went all over Parc Guell. La Pedrera. We saw Casa Battlo. Easter was so crowded at Sagrada Familia. 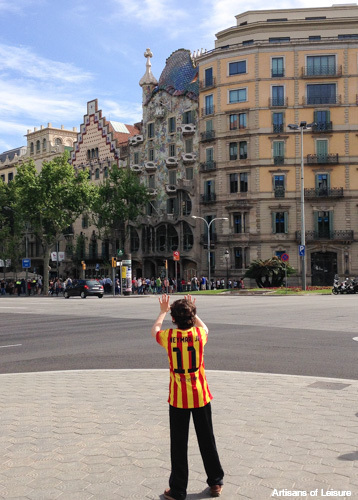 We toured stadiums in Barcelona and Madrid. We went into the locker room in Real Madrid and saw their names, players’ pictures and jerseys in the lockers‎. We went all over the stadium grounds. 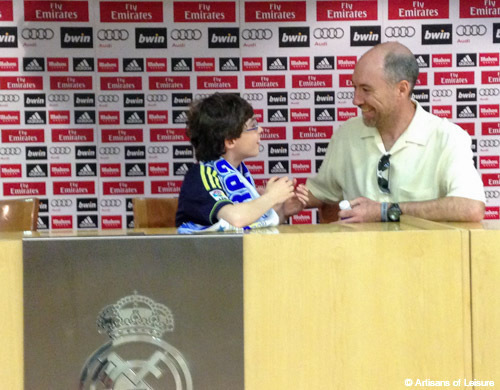 Q: Memories of the trip?
A: The game. The stadium tours. The cooking class and the tapas tour. The last night in Madrid, our guide took us to five places to try tapas. It was the best. The first place had the best Spanish tortilla with onions. We tried a bunch of other places and had seafood, croquettes, one place that only had things with ham (it was a ham shop), and the owner gave us a packet of ham.

We saw a lot of other art and museums. The Garden of Earthly Delights by Bosch had three sections and when it’s folded it shows the earth, and inside is the beginning of life, sins, hell. That was in Madrid.

Q: What do you like about traveling with Artisans of Leisure?
A: Well, they give us the best things to do. The trips have everything you would want.

Q: Where do you want to go next?
A: Maybe Sweden.

Contact Artisans of Leisure to customize a private tour based on your interests.